Man Utd will look to get their top four push back on track when they take on Stoke at Old Trafford on Tuesday. Here is the side I think van Gaal will pick:

Manchester United will look to get their top four push back on track when they take on Stoke City at Old Trafford on Tuesday night. Here is the side I think van Gaal will pick:

Defence: Matteo Darmian joined the ever-growing list of full-backs on the sidelines after being forced off against Southampton last weekend and isn’t expected to return just yet. With Ashley Young, Antonio Valencia and Phil Jones also still out, van Gaal is expected to stick with Guillermo Varela at right-back after he put in a solid display against Derby on Friday night.

The United boss also has problems on the left side of defence with Luke Shaw and Marcos Rojo out with long-term injuries so Cameron Borthwick-Jackson is expected to keep his place in the team while Daley Blind should continue alongside Chris Smalling in the middle of defence.

Midfield: Bastian Schweinsteiger has been ruled out for another month with a knee injury but Michael Carrick made his return on Friday night so he could start alongside Morgan Schneiderlin with Marouane Fellaini dropping to the bench.

Attack: Juan Mata was recalled to the starting eleven for the FA Cup tie and the Spaniard may keep his place after getting on the score-sheet during the 3-1 victory. Ander Herrera should come back in to the side so Jesse Lingard may drop out with Anthony Martial expected to once again support Wayne Rooney in attack. 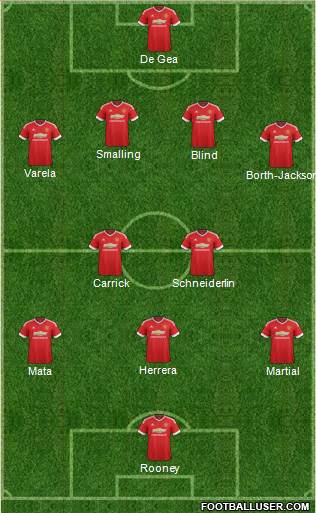