Chelsea will look to continue their climb up the table when they take on Watford on Wednesday. Here is the side we think Guus Hiddink will select for the game:

Chelsea will look to continue their climb up the Premier League table when they take on Watford at Vicarage Road on Wednesday night. Here is the side we think Guus Hiddink will select for the game:

Defence: Hiddink is likely to recall Kurt Zouma after he was rested at the weekend with Gary Cahill the man expected to drop out as skipper John Terry will be given another chance to impress and try to earn himself a new contract at Stamford Bridge.

Cesar Azpilicueta is almost certain to get a recall at left-back with Baba Rahman dropping out while Branislav Ivanovic should keep his place at right-back.

Midfield: John Obi Mikel should get a recall in midfield as the Nigerian international appears to have cemented his place in Hiddink’s starting eleven in recent weeks. Nemanja Matic should also keep his place if Hiddink wants to deploy two defensive midfielders to keep things tight against a dangerous Watford side.

Attack: Willian is a doubt for the game after picking up a foot injury during the win over MK Dons on Sunday so we may see the same front four that started in the FA Cup tie. Oscar should keep his place after scoring a hat-trick at the weekend while Eden Hazard and Cesc Fabregas should once again support Diego Costa in attack.

Alexandre Pato is eligible to be in the squad after completing his loan move from Corinthians but Hiddink will make a late decision over whether he’ll be selected or given more time to acclimatize. 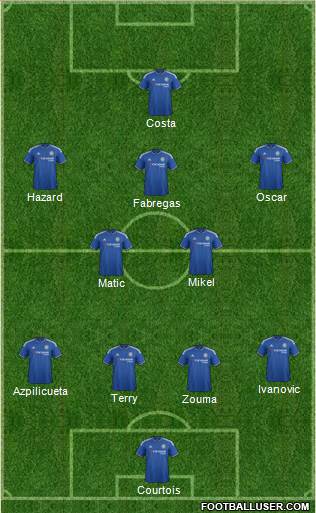