Liverpool will look to secure a first leg advantage when they face Augsburg in the Europa League on Thursday. Here is the side I think Jurgen Klopp will pick.

Liverpool will look to secure a first leg advantage when they take on Augsburg in Germany in the Europa League on Thursday night. Here is the side I think Jurgen Klopp will pick.

Goalkeeper: Number one goalkeeper Simon Mignolet is expected to keep his place in goal on Thursday night.

Defence: Klopp is expected to field a strong side as Liverpool don’t have any game this coming weekend having been knocked out of the FA Cup. Martin Skrtel remains out with a hamstring injury while Dejan Lovren is still struggling with his own hamstring complaint.

Alberto Moreno and Nathaniel Clyne are likely to keep their places in the full-back slots while Steven Caulker could come in to play alongside Mamadou Sakho with Kolo Toure given a breather.

Midfield: Kevin Stewart is out with a knee injury but Lucas Leiva is back in contention after missing the 6-0 thrashing of Aston Villa on Sunday with a minor knock so he could come in to the midfield alongside Jordan Henderson and Emre Can.

Attack: James Milner could move out to the right flank to offer more defensive support for this tricky away tie which could see Roberto Firmino given a rest. Philippe Coutinho and Daniel Sturridge have made successful returns form injury recently so the duo should be fine to start again tomorrow night.

Adam Lallana has been ruled out with a calf problem but Divock Origi, Christian Benteke and Jordon Ibe are all pushing for starts. 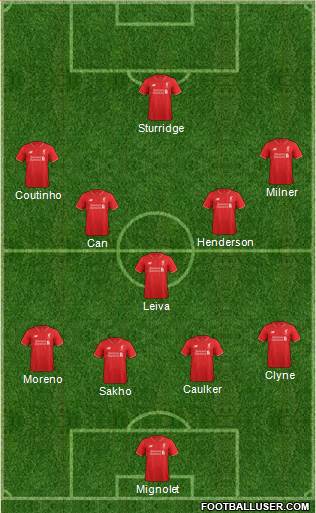