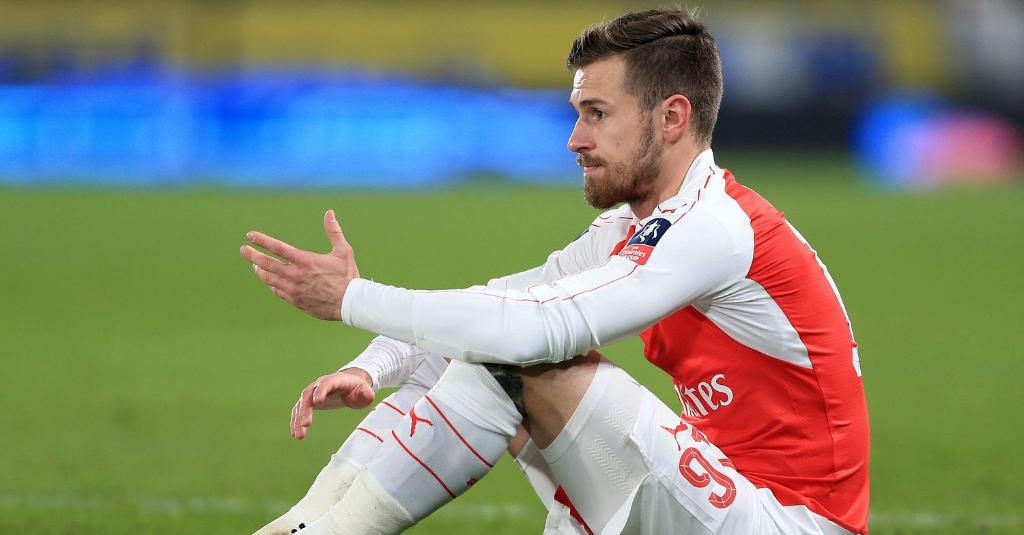 Arsenal’s injury woes look set to continue with Aaron Ramsey facing a six-week lay-off with a thigh tear that’s expected to keep him out for most of our Premier League title run-in, according to the Telegraph.

Ramsey came on as s second half substitute during Tuesday night’s FA Cup replay win at Hull City but lasted just 15 minutes before being forced off with a thigh problem.

Arsene Wenger admitted after the game that he was concerned about the midfielder’s latest injury but insisted they’d have to wait for the issue to be assessed before any diagnosis was given as to how long he’d be out for.

The Telegraph claim that the scan results are due in today but say that the club already fear Ramsey has suffered a thigh tear which would keep him out for around six weeks.

The newspaper says the 25-year-old is certain to miss at least the rest of this month which would rule him out of Sunday’s FA Cup quarter final with Watford, the second leg of our Champions League clash with Barcelona as well as our league clash with Everton.

However, a six-week lay off would see Ramsey also miss further Premier League games with Watford, West Ham and Crystal Palace as well as a possible FA Cup semi final at Wembley.

We’ll have to wait and see what the official diagnosis is from the club when the scan results come in but the early signs don’t look good and it appears we’ll have to be without Rambo for the foreseeable future.

His injury comes at a terrible time as we’re already without several midfielder’s with Jack Wilshere, Santi Cazorla, Alex Oxlade-Chamberlain, Mikel Arteta and Tomas Rosicky all still unavailable for selection.

Cazorla and Wilshere are edging closer to making their comebacks with the due pencilled in to return after the upcoming international break, so there’s a chance they could be available at the start of April if all goes to plan.

However, it still means Arsene is going to have to rely on Mohamed Elneny alongside Francis Coquelin for the rest of the month with Mathieu Flamini the only recognised back-up, so we better pray we don’t suffer anymore injuries in the middle of the park.