Liverpool take on Borussia Dortmund in the first leg of their Europa League quarter final clash on Thursday. Here is the side I think Jurgen Klopp will pick.

Liverpool will be looking to bring home a positive result when they take on Borussia Dortmund in the first leg of their Europa League quarter final clash on Thursday evening. Here is the side I think Jurgen Klopp will pick.

Defence: Klopp is unlikely to make too many changes from the side that drew with Tottenham Hotspur on Saturday so I think we’ll see the same back four that started at Anfield.

That means Dejan Lovren should retain his place ahead of Martin Skrtel alongside Mamadou Sakho at the back while Nathaniel Clyne should once again start at right-back. With Jon Flanagan ineligible, Alberto Moreno will continue at left-back after making a successful return from injury at the weekend.

Midfield: Lucas Leiva remains out with a thigh injury so I don’t see Klopp makes any changes in midfield either meaning Jordan Henderson should continue alongside Emre Can in the middle of the park. Joe Allen is pushing for a recall if the Reds boss wants to mix things up, but I can’t see the Welshman starting.

Attack: The one change I do think we’ll see is the return of Roberto Firmino after he came through training this evening unscathed. The Brazilian has missed the last two games with a hamstring strain but should now be ready to return to the side tomorrow night.

Daniel Sturridge is likely to continue up front while Philippe Coutinho is certain to keep his place in attack. The final place will be contested by James Milner and Adam Lallana and I think the vice-captain will just get the nod. 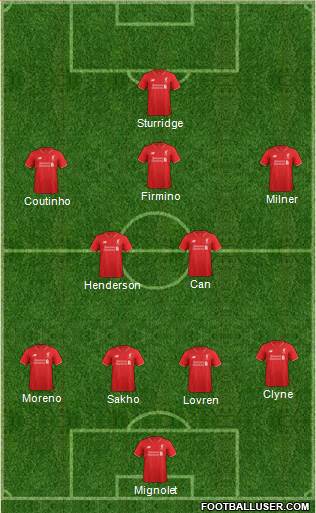