Chelsea take on Swansea City at the Liberty Stadium on Saturday afternoon. Here is the side we think Guus Hiddink will select for the game:

Chelsea take on Swansea City at the Liberty Stadium on Saturday afternoon. Here is the side we think Guus Hiddink will select for the game:

Defence: John Terry is expected to return to the squad after missing last weeks win over Aston Villa with a minor calf injury so Matt Miazga could drop out despite putting in a solid display on his debut.

Gary Cahill is also likely to return after missing the trip to Villa Park with a minor knock so Branislav Ivanovic should revert to right-back with Cesar Azpilicueta moving across to left-back.

Midfield: I think Hiddink might give John Obi Mikel a breather with Nemanja Matic coming back in to the side to start along with Spanish international Cesc Fabregas in the middle of the park, while Oscar could come back in to replace Ruben Loftus-Cheek in the advanced central midfield role.

Attack: Diego Costa will miss the game through suspension while Loic Remy has been ruled out with a groin injury so Alexandre Pato could make his first start for the club after coming off the bench to score on his debut last weekend.

Willian should get a recall after only being named on the bench against Villa having only returned from international duty 24 hours before the game while Pedro is likely to keep his place in the team after scoring twice at Villa Park.

Eden Hazard remains a major doubt due to a hip problem that’s hampered him in recent weeks. 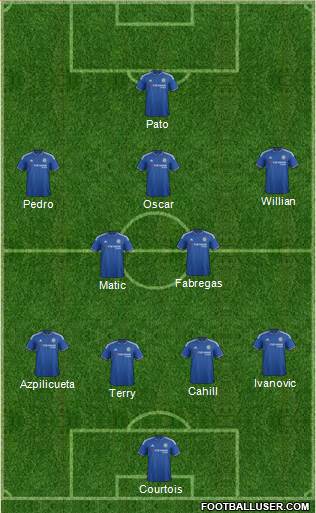