Liverpool will take on Villarreal in the second leg of their Europa League semi-final at Anfield on Thursday. Here is the side I think Jurgen Klopp will pick

Liverpool will take on Villarreal in the second leg of their Europa League semi-final at Anfield on Thursday night. Here is the side I think Jurgen Klopp will pick for the game.

Goalkeeper: Jurgen Klopp will recall number one goalkeeper Simon Mignolet to the starting eleven after resting him on Sunday. Danny Ward will therefore drop to the bench.

Defence: The Reds boss is set to make plenty of changes from the side that lost at Swansea City with several first team regulars ready to come back in after being rested at the weekend. Alberto Moreno and Kolo Toure should get recalls with Brad Smith and Martin Skrtel missing out while Nathaniel Clyne and Dejan Lovern will retain their places in the back four.

Midfield: Emre Can has made a swift recovery from an ankle injury and Klopp confirmed at his press conference earlier today that the German international is set to return to the squad.

With Jordan Henderson still out with a knee problem, Liverpool are likely to take a risk on Can for such an important game so I can see him starting in midfield alongside James Milner with Lucas Leiva and Joe Allen missing out.

Attack: Roberto Firmino was deployed in a ‘false 9’ role up front in the away leg but I fully expect Daniel Sturridge to lead the line tomorrow with the Brazilian dropping back in to a more natural attacking midfield role.

Philippe Coutinho is expected to keep his place in attack while Adam Lallana should get a recall after being an unused substitute last time out. 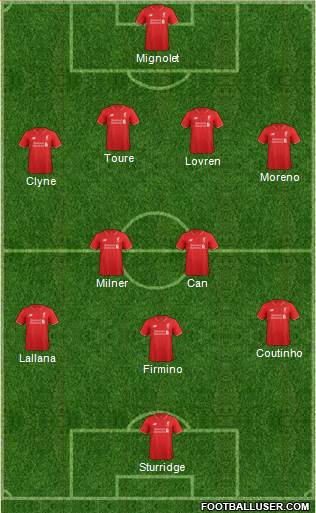