Arsene Wenger has admitted he’s concerned that Danny Welbeck has suffered another serious knee injury during our 2-2 draw at Manchester City this afternoon. 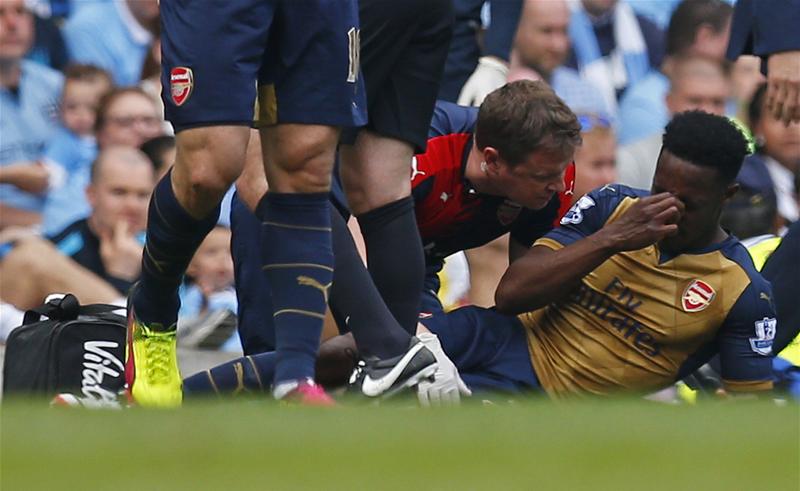 Arsene Wenger has admitted he’s concerned that Danny Welbeck has suffered another serious knee injury during our 2-2 draw at Manchester City this afternoon.

Welbeck went down after clashing knees with Bacary Sagna in the 20th minute at the Etihad and while he attempted to carry on, the attacker was soon looking frustrated as he walked straight down the tunnel after being replaced by Jack Wilshere.

We battled well without Welbeck and came from behind twice to salvage a well-earned point thanks to a 68th minute strike from Alexis Sanchez which sees us cement our position in third going in to the final game of the season.

Wenger was asked for an update on Welbeck straight after the game and the boss admitted that the initial sign is that the 25-year-old could have suffered damage to the lateral meniscus, which is the cartilage surrounding the knee joint.

Arsene revealed that Welbeck said it was ‘impossible’ for him to move after the injury but refused to confirm if Welbeck would miss the European Championships this summer, instead saying he prefers to be optimistic ahead of the scan results.

Danny Welbeck has a knee problem. I hope it is not too bad. We need to wait for a scan, I hope that it is not bad one and a meniscus. Danny is a strong boy, he is not a guy who moves out quickly. We tried to keep him on the pitch and straight away he tried to move on and he said it was impossible. At half time, I looked at him and he was very down so he must have pain. Lets hope we have good news tomorrow from the scan.

on how bad it could be…

It will come as a major blow to Welbeck if he has suffered another major injury as he’s only just recovered from his last knee injury that kept him on the sidelines for over ten months.

We’ll have to wait for scan results to come back before we know the full extent of the injury but with Roy Hodgson naming his England squad next week, Welbeck is going to have to pray for some positive news.