Jose Mourinho has been pictured leaving his London home this morning as he makes his way to meet Man Utd officials to agree terms over a £15m-a-year deal. 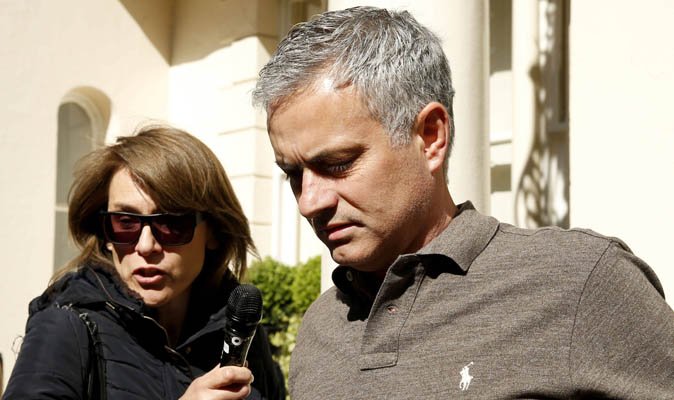 Jose Mourinho has been pictured leaving his London home this morning with the Mirror claiming he is on his way to meet Manchester United officials to agree terms over a £15m-a-year deal.

Louis van Gaal was officially sacked as United boss on Monday night after overseeing a turbulent campaign. The Dutchman did manage to win United the FA Cup for the first time since 2004 but fans were disillusioned with his style of football and he was axed after failing to qualify for the Champions League.

Mourinho is the odds-on favourite to replace van Gaal and the former Chelsea boss was snapped leaving his house this morning before jumping in to a Range Rover, and it seems he’s en route to meet with the United board.

The Mirror claim Mourinho’s agent, Jorge Mendes, is flying in to England to attend meetings with United officials today where he’ll thrash out the terms of a £15m-a-year deal – which would make Mourinho the joint highest paid manager in the world alongside Pep Guardiola.

It looks like things are moving swiftly and the newspaper suggests that Mourinho could be named as van Gaal’s successor as early as this evening, although it may be delayed until Wednesday if negotiations drag on.

Mourinho is a divisive figure and despite his obvious success in the game, there are still some supporters opposed to his appointment as United manager. However, I’m sure many will come around if the so-called ‘Special One’ brings the Premier League title back to Old Trafford next season.

Here are some photos of Mourinho leaving his London home this morning courtesy of the Express: