Spanish defender Marcos Alonso has been snapped posing in a Chelsea shirt after he completed his £23m move from Fiorentina on a five-year contract.

Transfer deadline day is finally here so we’ll bring you all the latest transfer rumours and gossip from around the globe. Here, Marcos Alonso has completed his move to Chelsea…

Chelsea have announced on Chelseafc.com that Spanish defender Marcos Alonso has completed his move from Fiorentina after signing a five-year contract.

Blues boss Antonio Conte has been desperately trying to strengthen his defensive options this summer as the Italian coach has been forced to draft in youngster Ola Aina due to the fact he only currently has four senior defenders to choose from.

A new left-back became a priority after Baba Rahman was allowed to join German side Schalke on loan last month and Alonso soon emerged as a prime target for the west Londoners.

Following swift negotiations, the Evening Standard reported earlier today that Alonso was in London and undergoing his medical at Cobham after Chelsea had agreed a deal worth £23m with Fiorentina.

It appears those formalities have now been completed as Chelsea announced Alonso’s signing on their official website this evening with the defender signing a five-year contract.

‘I’m very happy. It’s a step up in my career and I think this is the perfect place for me to continue developing. It’s time for me to win some titles.

‘It was an easy decision for me to make when I heard the club were interested in signing me. My family and close friends know Chelsea is the club I have dreamed about playing for so I’m really excited about the challenge and I’m looking forward to working with my new team-mates.’

The 25-year-old has previous experience in the Premier League having spent three-years at Bolton Wanderers between 2010 and 2013 while he also spent six months on loan at Sunderland in 2014.

Alonso’s arrival will provide real competition at left-back but he’ll also give Conte the option to move Cesar Azpilicueta to right-back and free Branislav Ivanovic up to play in a central defensive role if needed.

Here are some photos of Chelsea’s latest signing and a video of him speaking for the first time since completing his move: 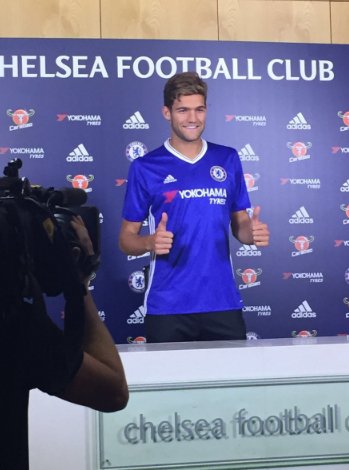 Let's hear from the new boy @marcosalonso03 then… More to come online! pic.twitter.com/hzMMh40Yzh