Arsene Wenger has offered an update on Laurent Koscielny ahead of the Paris Saint-Germain game after the defender suffered an eye injury at the weekend. 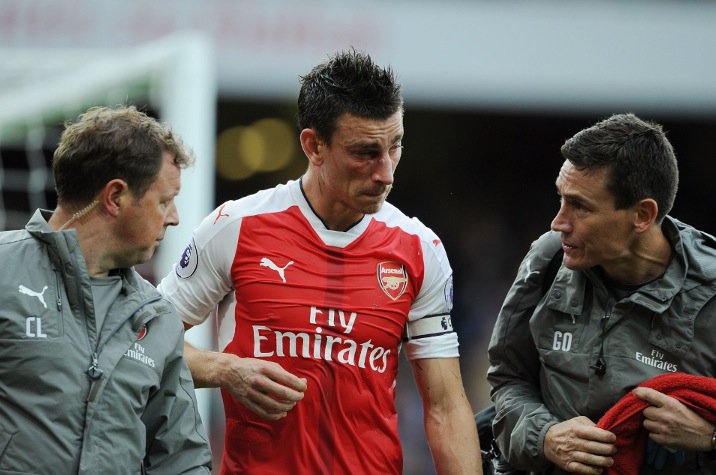 Arsene Wenger has confirmed that Laurent Koscielny is a doubt to face Paris Saint-Germain tomorrow night after the defender suffered an eye injury against Southampton at the weekend.

Koscielny picked up the injury during the closing minutes at the Emirates Stadium on Saturday afternoon after Jose Fonte caught the centre-back in the face with his foot following a 90th minute corner.

The incident happened just seconds before we were awarded a penalty when Olivier Giroud was hauled down in the area and Koscielny received treatment as Santi Cazorla converted the spot kick to secure a late 2-1 win.

After the match, Wenger told reporters that the French international is now a doubt to face PSG on Tuesday night as his eye is ‘very swollen’ and has already ‘closed up’.

The boss is quoted as saying by the Mirror.

“He [Koscielny] will be a little bit of a concern. The eye is already very swollen and it is closed up.”

Koscielny will now be assessed at training today to see if he’ll be fit enough to travel to France ahead of our Champions League group stage match at the Parc des Prince.

If the defender is ruled out, then youngster Rob Holding is on stand-by to deputise alongside Shkodran Mustafi against PSG tomorrow night but hopefully Koscielny will be passed fit as it would be a huge blow to lose him.

Gabriel is back in full training but won’t be in a condition to start just yet while Per Mertesacker is still nursing his way back to full fitness following a serious knee injury so it’s important we don’t lose Koscielny as well for such a big game.