Arsenal will take on Nottingham Forest in the third round of the EFL Cup on Tuesday night. Here is the side Gooner Mac thinks Wenger will select for the game: Arsenal will take on Nottingham Forest at the City Ground in the third round of the EFL Cup on Tuesday night. Here is the side Gooner Mac thinks Arsene Wenger will select for the game:

Goalkeeper: David Ospina is expected to come back in between the sticks tomorrow night with our ‘cup keeper’ replacing Petr Cech in goal.

Defence: Wenger is set to ring the changes from the side that beat Hull City 4-1 on Saturday afternoon with Laurent Koscielny and Shkodran Mustafi given a rest. Gabriel is available after recovering from an ankle injury so the Brazilian should start at the back with Rob Holding expected to join him.

Kieran Gibbs is likely to replace Nacho Monreal at left-back while we could get a first glimpse of Mathieu Debuchy this season as the Frenchman is still an Arsenal player after failing to secure a move during the summer transfer window.

Midfield: Granit Xhaka came off the bench to score a stunner at the weekend and he should get his first start in three games with Santi Cazorla given a well-earned rest.

Mohamed Elneny should also get a recall in place of Francis Coquelin while Aaron Ramsey isn’t expected to be risked despite returning to full training following a hamstring injury.

Attack: Olivier Giroud missed the win at the KCOM Stadium on Saturday with a minor toe injury but the French international could come back in to the squad to make his first start of the new season tomorrow night.

Mesut Ozil and Alexis Sanchez should be rested along with Alex Iwobi and Theo Walcott meaning Lucas Perez could get another chance to impress following his summer move from Deportivo La Coruna.

Alex Oxlade-Chamberlain is expected to come in to the attack after dropping to the bench at the weekend while youngster Jeff Reine-Adelaide could get a run-out after being promoted to the first team squad. 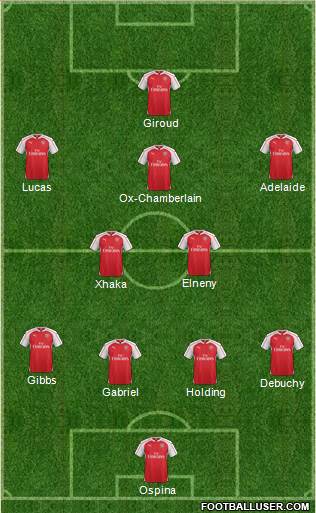