Conte To Make 9 Changes In 4-1-4-1: Predicted Chelsea Line-Up vs Leicester

Chelsea take on Leicester City at the King Power in the third round of the EFL Cup on Tuesday night. Here is the side we think Antonio Conte will select

Chelsea take on Leicester City at the King Power Stadium in the third round of the EFL Cup on Tuesday night. Here is the side we think Antonio Conte will select for the game:

Goalkeeper: Thibaut Courtois is expected to be rested with Asmir Begovic coming in between the sticks tomorrow night.

Defence: With John Terry still nursing an ankle injury and Kurt Zouma out with a long-term knee problem, Conte has limited options to rotate in the middle of defence so I expect David Luiz to continue alongside Gary Cahill at the back.

Marcos Alonso should be handed his full debut at left-back while youngster Ola Aina could get a chance to impress at right-back with Branislav Ivanovic and Cesar Azpilicueta given a rest.

Midfield: Cesc Fabregas has been frozen out of the starting eleven in the Premier League but the Spaniard should get a rare start against Leicester in the cup while John Obi Mikel could also make his first start of the new season.

Ruben Loftus-Cheek started against Bristol Rovers in the previous round so he should get another run out tomorrow with N’Golo Kante, Oscar and Nemanja Matic all given a rest.

Attack: Conte should also hand his regular trio of Diego Costa, Eden Hazard and Willian well-earned breathers with Pedro, Victor Moses and Michy Batshuayi coming in to the attack. 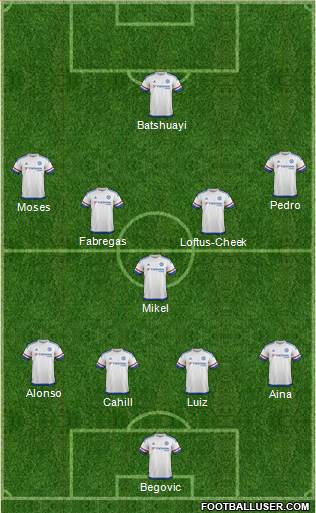