Arsenal take on Basel at the Emirates in the group stages of the Champions League on Wednesday night. Here is the side we think Arsene Wenger will select Arsenal will look to build on their opening draw at PSG when they take on Basel at the Emirates in the group stages of the Champions League on Wednesday night. Here is the side Gooner Mac thinks Arsene Wenger will select for the game:

Goalkeeper: David Ospina started in the game at Paris Saint-Germain and Wenger has confirmed the Colombian international will continue to play in the Champions League ahead of regular No.1 Petr Cech.

Defence: Shkodran Mustafi continued to forge a solid partnership alongside Laurent Koscielny with the pair both superb during our impressive 3-0 victory over Chelsea at the weekend so I see no reason why the boss would split them up against Basel.

Per Mertesacker continues to nurse a knee injury but Nacho Monreal and Hector Bellerin will once again occupy the full-back positions.

Midfield: Francis Coquelin was forced off with a nasty knee injury during the victory over Chelsea so he’s set for a spell on the sidelines. Granit Xhaka is the man expected to come in and he’ll line-up against his brother, who plays for Basel.

Aaron Ramsey remains unavailable as he continues his recovery from a hamstring injury and while Mohamed Elneny is pushing for a recall, I think the boss will stick with Santi Cazorla and resist the temptation to give the Spaniard a rest.

Attack: Olivier Giroud will serve a suspension after receiving a late red card during the closing stages of the PSG game. Alexis Sanchez was in fine form against Chelsea and looks to be growing in to the central role he’s been occupying lately and I think we’ll see the Chilean continue through the middle on Wednesday.

Mesut Ozil was outstanding last time out so he’ll obviously start along with Theo Walcott who continued his resurgence with another excellent display against Chelsea.

Alex Iwobi also put in another superb performance against the Blues so I expect him to keep his place in attack with the likes of Alex Oxlade-Chamberlain and Lucas Perez options from the bench. 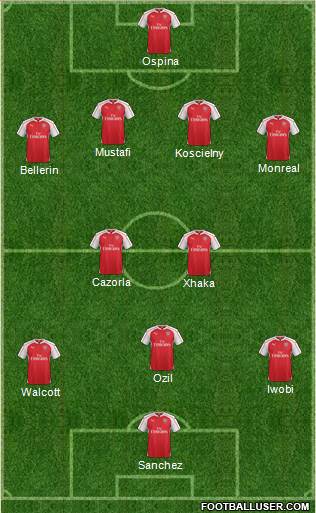 What do you think of the team? What side would you put out for the game?