Chelsea take on Hull City at the KCOM Stadium on Saturday afternoon. Here is the team we think Antonio Conte will pick for the game:

Chelsea will be desperate to bounce back from their disappointing defeat at Arsenal last week when they take on Hull City at the KCOM Stadium on Saturday afternoon.

Goalkeeper: Thibaut Courtois wasn’t particularly at fault for any of the three goals last weekend as he was badly exposed by his defence so I expect the Belgian to keep his place ahead of Asmir Begovic.

Defence: Conte has been boosted by the return to fitness of skipper John Terry after he finally recovered from a niggling ankle injury and he’s expected to come straight back in to the back four on Saturday.

Gary Cahill is the man most likely to make way as he was extremely poor against the Gunners and was at fault for the opening goal so he could make way with David Luiz keeping his place alongside Terry.

Branislav Ivanovic is also in danger of losing his place at right-back as the Serbian had a poor game at the Emirates so we could see Cesar Azpilicueta move across to the right with Marcos Alonso coming in at left-back.

Midfield: Cesc Fabregas also had a game to forget against his former team last weekend so the Spaniard may find himself back on the bench with Oscar recalled to the starting eleven on Saturday.

N’Golo Kante wasn’t at his best last time out either but no doubt he’ll keep his place in front of the back four with Nemanja Matic also likely to retain his spot in midfield.

Attack: Conte is unlikely to tinker too much with his attack as Eden Hazard and Willian are key players and they should continue to support Diego Costa up front. Conte could call upon the likes of Michy Batshuayi and Victor Moses from the bench during the game. 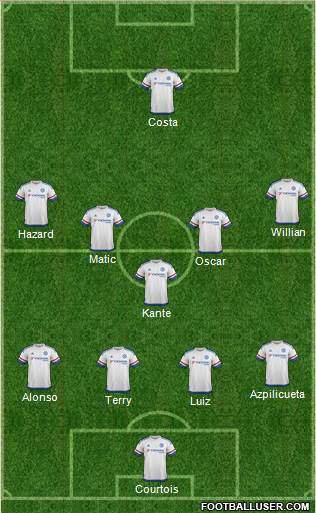 What do you think of the team? What side would you start?