Spain boss Julen Lopetegui has left out Arsenal, Chelsea and Manchester United stars from his squad for their upcoming games against Italy and Albania.

Hector Bellerin and Nacho Monreal have continued to impress in the full-back positions at Arsenal this season while Santi Cazorla has also been in fine form but all three have been excluded along with summer signing Lucas Perez. – although Bellerin has been named in the U21 squad.

Cesc Fabregas has struggled to establish himself as a first team regular under new boss Antonio Conte at Chelsea so far this season and it seems to have cost him a place in the Spain squad as Lopetegui has also overlooked the former Barcelona playmaker.

The final big-name absentee from England is Juan Mata and the 28-year-old has failed to force his way in to Lopetegui’s plans despite scoring two goals and providing one assist in his 5 Premier League appearances so far this campaign.

However, there are still some English-based representatives as Chelsea striker Diego Costa is selected along with Manchester City duo David Silva and Nolito while Man Utd goalkeeper David De Gea is also named in the 23-man squad.

Spain take on Italy next Thursday in their World Cup qualifier before facing Albania three days later as they look to take another huge step closer to securing qualification to Russia 2018.

Here is the confirmed squad: 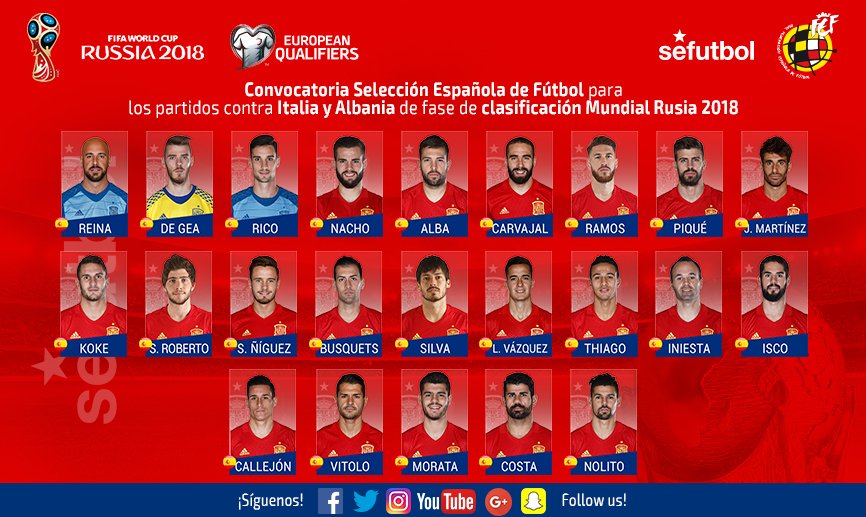