Arsenal take on Burnley at Turf Moor on Sunday afternoon. Here is the side Gooner Mac thinks Arsene Wenger will select for the game:

Arsenal will look to continue their excellent recent form when they take on Burnley at Turf Moor on Sunday afternoon. Here is the side Gooner Mac thinks Arsene Wenger will select for the game:

Goalkeeper: David Ospina was back in goal for the Champions League win over Basel on Wednesday night but Petr Cech is set to return between the sticks on Sunday.

Defence: We have no fresh injury concerns at the back to contend with so I see no reason why Wenger would want to change what has become a solid back four in recent weeks.

That means Shkodran Mustafi should continue alongside Laurent Koscielny at the back with Nacho Monreal and Hector Bellerin once again occupying the full-back positions. Per Mertesacker continues to nurse a knee injury.

Midfield: Francis Coquelin will undergo a late fitness test after Wenger revealed at his press conference earlier that today the midfielder has made a swift recovery from the knee injury he sustained against Chelsea last week.

However, the boss hinted that he’ll be cautious with the Frenchman so I expect Granit Xhaka to retain his place alongside Santi Cazorla in the middle of the park this weekend.

Aaron Ramsey remains unavailable for selection as he continues his recovery from a hamstring injury but the Welshman should be back after the international break.

Attack: Olivier Giroud remains out with a toe injury that has hampered him since the PSG game earlier this month so Alexis Sanchez is once again set to lead the line up front after putting in another excellent performance in midweek.

Theo Walcott was outstanding last time out after scoring a brace against Basel so he should keep his place on the right while Mesut Ozil will obviously start in the No.10 role.

Alex Iwobi put in another solid display in midweek but he’s played a lot of football lately so I wouldn’t be surprised to see Wenger hand him a breather and give Alex Oxlade-Chamberlain a chance on the left. 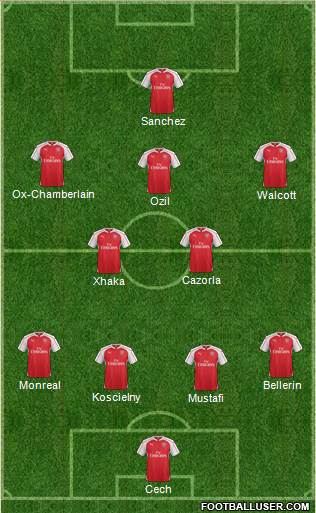