Manchester United take on Fenerbache at Old Trafford on Thursday night. Here is the side I think Jose Mourinho will pick for the game:

Manchester United will be looking to take control of their Europa League group when they take on Fenerbache at Old Trafford on Thursday night.

With a huge Premier League game at Chelsea on Sunday to worry about Jose Mourinho is expected to shuffle his pack, here is the side I think he’ll pick for the game:

Goalkeeper: David de Gea is set to get a well-earned rest following his heroics at Anfield on Monday night with Sergio Romero coming in to the side.

Defence: Mourinho confirmed at his pre-match press conference this afternoon that Luke Shaw would start after he recovered from a groin injury so Daley Blind should drop to the bench.

Antonio Valencia is also expected to get a rest with Timothy Fosu-Mensah starting at right-back while Chris Smalling should continue alongside Eric Bailly at the back.

Midfield: Ander Herrera is set to be handed a breather following his excellent performance at Anfield last time out so Michael Carrick could make a rare appearance in midfield.

Paul Pogba put in another underwhelming display against Liverpool but the French international should be given another chance to impress tomorrow night with the likes of Marouane Fellaini and Morgan Schneiderlin on the bench.

Attack: Wayne Rooney has been left out of United’s last two line-ups but I think we’ll see the skipper recalled on Thursday with Juan Mata and Jesse Lingard also pushing for game time.

Zlatan Ibrahimovic could be given a rest with Marcus Rashford moving through the middle. Anthony Martial trained with the squad today after missing the Liverpool game with a minor injury but he might only be named on the bench along with Henrikh Mkhitaryan – who has just recovered from a thigh problem. 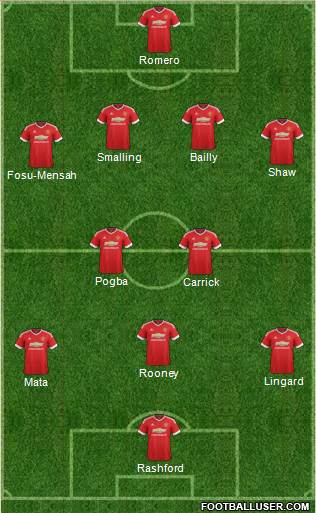 What do you think of the team? What line-up would you go for?