Manchester United winger Jesse Lingard has been given the nod over Arsenal’s Theo Walcott as Gareth Southgate gets set to make three changes for England’s friendly with Spain tonight, according to the Mirror.

Southgate oversees the final of his four-match ‘trial’ as England manager this evening so it’s no surprise that he’s decided to name a strong side with the former Middlesbrough boss expected to make just three changes from the side that beat Scotland on Friday.

With Wayne Rooney ruled out with a minor knee problem there is a space open in attack and with Adam Lallana set to move in to a more central position, the Mirror claim that Lingard will come in on the right wing.

The newspaper says the United star has been chosen ahead of Arsenal’s Theo Walcott – despite the 27-year-old enjoying some fine form so far this campaign with the Gunners attacker out-scoring Lingard 8 to 2 in all competitions.

Leicester City’s Jamie Vardy is also expected to get a chance to impress up front for England with Liverpool hitman Daniel Sturridge dropping back to the bench despite finding the target last time out.

The Mirror also claim that Tottenham full-back Kyle Walker is set to miss out with a knock so Liverpool’s Nathaniel Clyne will come in at right-back but Danny Rose is expected to recovery from a minor injury to start at left-back.

Jordan Henderson will keep the armband in the absence of Rooney with the Liverpool star once again being joined by Spurs midfielder Eric Dier in the middle of the park.

Manchester City defender John Stones will also keep his place alongside Gary Cahill at the back while on-loan goalkeeper Joe Hart will wear the gloves between the sticks.

Here is how England are expected to line-up against Spain tonight: 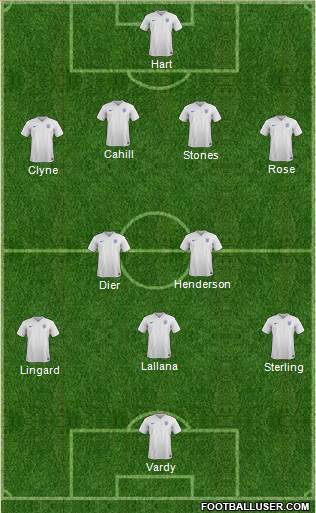