The draw for the last-16 of the Champions League has been conducted and Arsenal have been handed a tough draw but Man City and Leicester City will be pleased.

The draw for the last-16 knockout stages of the Champions League has been conducted in Nyon today and once again Arsenal have been handed a nightmare draw but Manchester City and Leicester City will be pleased.

Arsenal progressed to the knockout stages of the competitions as group A winners after edging out Paris Saint-Germain by taking advantage of their surprise 2-2 draw with Ludogorets after beating Basel 4-1 in Switzerland last week.

Arsene Wenger was hoping it would mean his side would get a favourable draw but unfortunately the Gunners have once again been paired against Bayern Munich for the fourth time in five years.

The first leg will be played away in Munich before Arsenal welcome the German champions to the Emirates for the second leg so at least they’ve got the advantage of playing away first this time around.

Manchester City eased through group C after finishing runners-up to Barcelona and Pep Guardiola’s men have been given an excellent draw after being pitted against Monaco – who topped their group ahead of Bayer Leverkusen and Tottenham.

Leicester took full advantage of their favourable group after finishing top of group G ahead of Porto, Copenhagen and Brugge during their debut campaign in the Champions League.

Claudio Ranieri’s side have now been handed a decent draw after being paired with Sevilla so the Premier League champions will be quietly confident of booking their place in the quarter finals.

The ‘good’ news for Arsenal is that PSG were drawn to face Barcelona so they would have had a nightmare draw even if they finished second, while Real Madrid will face Napoli, Benfica take on Borussia Dortmund, Porto face Juventus and Bayer Leverkusen will take on Atletico Madrid. 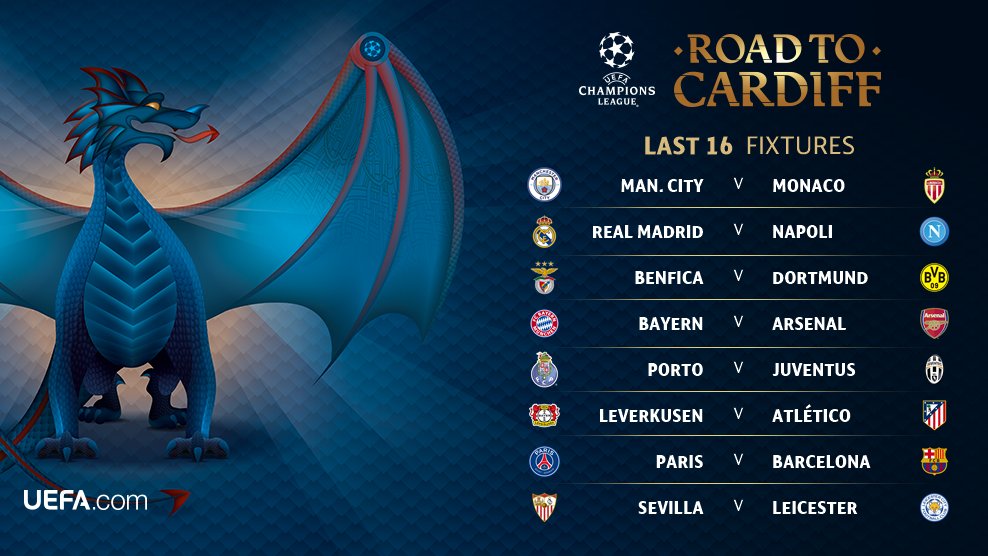