Chelsea will be looking to maintain their advantage at the top of the Premier League when they take on Crystal Palace at Selhurst Park on Saturday afternoon.

The Blues head in to the weekend action sitting six points clear at the top of the table after securing consecutive 1-0 wins over West Bromwich Albion and Sunderland  over the past week. Those results extended their winning streak to 10 matches and not only would Chelsea move nine points clear with another win tomorrow, but they’d equal their club record of 11 consecutive victories which was set in 2009.

That may not be easy though as Palace will no doubt be desperate to bounce back following their controversial 2-1 defeat to Manchester United on Wednesday night which saw the Red Devils score an offside opening goal while two United players were fortunate not to see red. The defeat in midweek has left the Eagles sitting 16th in the table and just three points above the relegation zone so Alan Pardew will be looking for a response from his players tomorrow.

Chelsea are the 8/13 favourites to win the game while I also like the look of both teams to score at odds of 4/5. If you like to bet on exact score-lines then 2-1 Chelsea is our tip at odds of 7/1 while if we throw-in Diego Costa as first scorer then some betting websites are offering very tempting odds of 14/1. A £10 bet would return £150, but remember to only bet what you can afford to lose.

Chelsea welcome back Eden Hazard after the Belgian international recovered from a minor knee injury which kept him out of the Sunderland game in midweek.

John Terry continues to miss out with a buttock injury but Kurt Zouma was back in the squad on Wednesday night after recovering from a serious knee injury.

Oscar isn’t expected to be involved due to illness but the Brazilian international has also been the subject of intense speculation suggesting he’s set for a big-money move to China.

Palace welcome Jason Puncheon back in to the squad after he served a one-game ban last time out while Mathieu Flamini is a doubt with a groin injury. 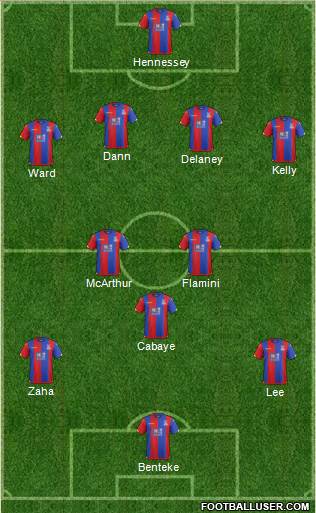 Crystal Palace 1-2 Chelsea: Palace have a poor recent record against Chelsea on home soil having scored just 3 goals in their previous 7 games at Selhurst and Conte’s side come in to the match in sensational form so it’s hard to see past an away win here. Pardew’s men may put up a good fight, just as they did against United, but I think Chelsea will still collect all three points to move 9 clear in the table.