Players from Chelsea and Man Utd have been in included in Gary Neville’s Premier League Team of the Season but there is no place for this Arsenal ace.

Players from Chelsea and Manchester United have been in included after Sky Sports pundit Gary Neville selected his Premier League Team of the Season so far.

League leaders Chelsea dominate Neville’s side with SIX representatives in the eleven, which should come as no surprise given Antonio Conte’s men have won their last 11 league games in a row to open up a six point advantage at the top of the table.

Thibaut Courtois has conceded just 11 goals in his 17 games so far and he’s Neville’s pick of the goalkeepers while Cesar Azpilicueta is selected in defence thanks to his consistent performances in Conte’s new-look back three.

Many scoffed when Chelsea re-signed David Luiz in the summer but the afro-haired Brazilian has proven his doubters wrong by putting in some excellent displays at the back to help guide the Blues to the top of the division and he also makes the team.

N’Golo Kante has continued to impress in the middle of the park following his summer move from Leicester while Eden Hazard has rediscovered his best form under Conte to also make the cut.

Unsurprisingly, Diego Costa leads the line up front with the Spanish international scoring his 13th league goal of the season to fire Chelsea to their latest win at Crystal Palace at the weekend.

Southampton’s Virgil van Dijk is also selected in Neville’s side after putting in some superb performances at the back for the Saints while Danny Rose is also rewarded for his fine displays for Tottenham.

Liverpool’s Adam Lallana makes the cut but there is no room for team mates Philippe Coutinho, Sadio Mane or Roberto Firmino while Manchester City’s Fernandinho is named in Neville’s team thanks to his impressive start to the campaign.

However, Alexis Sanchez may feel a little unlucky not to have made the cut as the Arsenal striker has notched 12 goals in 17 league games so far, as well as providing a further 7 assists for his team mates.

That hasn’t done enough to convince Neville the Chilean deserves a place in his Team of the Season as the former Manchester United defender has opted for Reds striker Zlatan Ibrahimovic instead.

The Swede has adapted well to the Premier League after bagging his 11th league goal of the season during Saturday’s 2-0 win at West Brom and Neville feels the former Barcelona hitman has outperformed Sanchez so far.

Did he get it right? Here is Neville’s Team of the Season so far: 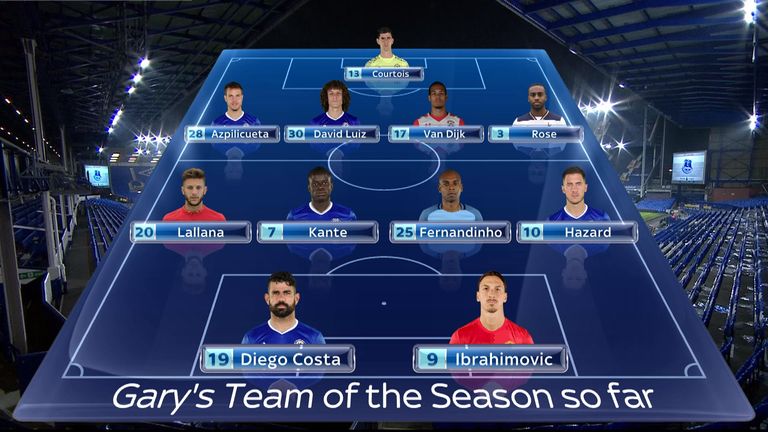