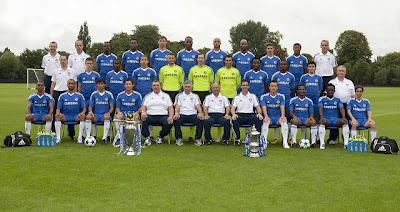 Very bad run, especially the loss to Arsenal has hurt us badly and all the bad omens seem to be up out there against us. This Chelsea team seems very lame and now the doubt has grown up whether Chelsea could even qualify for Europe next season. First Let’s have a look at our current squad.

1 Petr Cech – has been a classy keeper except for a couple of mistakes but I will blame the lame defense for those mistake rather than the Keeper. If not for Cech we would have had worse results. *****

2 Branislav Ivanovic – I feel sorry for him. He is badly struggling to play in the Center Back position despite it being his favourite and best position than Right Back. When he played Right Back he has been good but partnering with Terry or Alex or Ferreira in the center has not been good for him, especially his mistake yesterday lead to the first goal. Was a great player for us last season but positional change has affected him badly this season and he has had a disastrous first half of a season. ***

3 Ashley Cole – Where has our attacking LB gone? He did well in the start of the season but later he has been almost anonymous in the games. In the last few months we didn’t see the attacking forward runs and crosses from our ‘world’s best’ Left Back. I won’t say he is bad but he is not as good as he used to be, may be the growing age is affecting his runs. Seriously he is not the same player who rocked the Left side of the pitch last year. ***

5 Michael Essien – Had a brilliant start to the season. He was almost like a ‘new signing’ – that’s how we all hailed him but along with the teams bad run his skill has also seems to be sunken. That unnecessary ‘foul’ and a red card along with a 3 match ban did affect the team very much, especially when Lampard was out and after the come back Essien has lost the spirit. He was so bad against Arsenal yesterday, where is the ‘Ess Express’? I was wondering for the whole 90+ minutes. ****

7 Ramires – Baby?! Yes! A baby to the premier league, he has the pace and passion but finds it hard to cope up with the rough and tough Premier League game. He seems vulnerable, his physique is very light and he finds it hard to utilize his speed. Had shown flashes of skill in tackling and dribbling but not a consistent player yet. He needs time to settle but unfortunately we don’t have the depth in the squad to handle Ramires in the best possible way. **

8 Frank Lampard – At a point I thought has Lampard got any serious illness. Man, he was out for almost for the whole first half of this season and we’ve missed his 20+ goals a season from the midfield. His come back against Arsenal wasn’t impressive but not too bad. Had not we lost Lampard with injury the situation would’ve been different. * 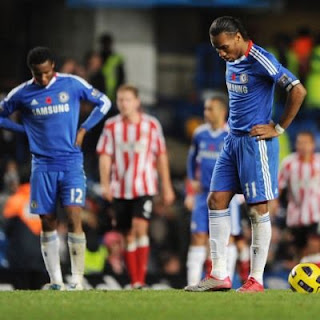 11 Didier Drogba – ‘The saviour is too old’. I have nothing much to say, because I don’t expect a player of his age to be the ‘saviour’ of a ‘champions’ team. For me his performance is ok for his age but tallying it with the expectation makes his performance a disaster. We can’t expect the Drog of last season, every season. He is comparatively slow and seems disinterested in forward runs. He looks like he is preparing for ‘coaching’ after retirement. He was a rough player but now his generosity has increased to a level where his commitment has sunken. I know any fan who saw him against Marseille at Velodrome would be pissed off so badly. Rather than making tackles he was shaking hands and tapping players who tackled him. This sudden change would be good for Drogba personally but not good for the team or the game. For me as a 32 year old player he is doing ok but as the ‘first choice striker’ and ‘the saviour’ of the team he has failed to touch the line of expectations. **

15 Florent Malouda – The star man of last season, indeed started this season very well but unfortunately has sunken along with the team. Florent wasn’t impressive when he came to Chelsea but under Ancelotti he showed his scoring skills and proved himself as a worthy stock, I cannot understand what has gone wrong with him now, these last few games he seems lost, get’s infuriated too soon, and definitely has lost his scoring boots. ***

17 Jose Bosingwa – Still not fully recovered from his injuries and played a few games but has lost his attacking runs forward, struggling to defend, seems more vulnerable. No more a ‘top level’ player. *

18 Yury Zhirkov – Flashes of skills, especially his performance against Moscow was really amazing but unfortunately has been injury prone and proving a waste for 18Million. *

19 Paulo Ferreira – Never considered him as a ‘top class’ player but always stepped in and gave average performance. I doubt why Ancelotti prefers him over Bruma? He has not enough pace, he struggles against speedy wingers. Everyone saw how he struggled against Nasri yesterday. *

21 Salomon Kalou – I never considered him as a ‘top class’ player. Lucky to play for Chelsea. He had scored few goals but he no consistent performer. You can’t depend on him. For me Kalou doesn’t deserve to play for ‘Chelsea’. (no star)

22 Ross Turnbull – Not as good as Cudicini to be a back up keeper. (no star)

23 Daniel Sturridge – Future of England? – My Foot. Does nothing impressive except enter the arena with a ‘backward’ run (why does he do that?!). I won’t consider him young, because Carrol is of same age and he is in another level. Can develop but sings are very low. * 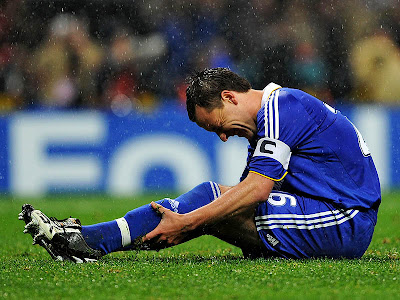 26 John Terry – Captain. Leader. Legend. He has been good but even he couldn’t motivate the team. His injury crisis and absence has affected Chelsea immensely. He may have made a few mistakes but without Terry Chelsea’s defense has been a disaster. This first half season I would say he has been average as a Leader and a Player but definitely there is room for improvement. ***

33 Alex – What a ‘thunder bolt’ against Arsenal at the Bridge?! Has been an awesome Center Back but unfortunately his injury has screwed both his and Chelsea’s season. Alex & Terry partnership in the center has been good, because Ivanovic has been awesome when playing in the Right Back. We are missing Alex. ****

38 Patrick van Aanholt – Give him a chance!

39 Nicolas Anelka – Scored a few goals but he cannot put up a one man show. Lats year’s success was due to the excellent Drogba-Anelka partnership but that is not working this season. One cause may be both are getting old and already Anelka seems planned for a future at MLS. **

40 Henrique Hilario – Why is he at Chelsea?

43 Jeffrey Bruma – Why is not Ancelotti trusting him? He has done very good for Netherlands under 21. I think Ancelotti should give him a chance. Especially rather than playing Ferreira in the Center, Ancelotti could have played Bruma.

44 Gael Kakuta – Not really ready for ‘top level action’ but shows flashes of talent, If Ancelotti plays him, he could be a great player for Chelsea. ***

45 Fabio Borini – All the contract saga and kept away from the first team but did very well for the reserves. I consider him a better player than Sturridge. **

46 Josh McEachran – If Chelsea has something positive to be happy about this first half season of 2010/2011 it is Josh! What a youngster we’ve found. Definitely the next Lampard if he is nurtured in the right way. Has shown excellent flashes of skill, especially he impressed all of us against Marseille despite the bad loss. Good Youngster and Future of Chelsea (if and only if he is nurtured properly and stays in the ground). ****

Manager : Carlo Ancelotti – What else to say? I have already discussed in length. He is a great manager and definitely axing of his right arm ‘Wilkins’ has affected him a lot. May be without Wilkins he is finding it very hard to communicate with the players; feed the players with what exactly he wants to feed. He has to stay, a sack will be a disaster for the club. Why can’t Roman let Ancelotti handle the players and staff? 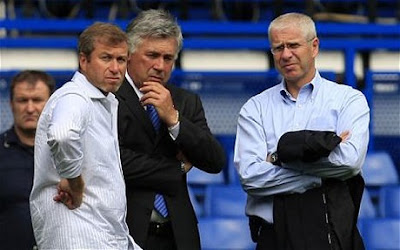 In summary. The first quarter of the season was awesome for us and the second quarter has been a  disaster. Definitely this first team lacks depth and skill. If Roman is thinking about playing in Europe in 2013 and not signing any players, then he won’t play in the Europe next season itself. I’m pretty sure that If we don’t sign at least a Defender and a Striker, not defending the Championship but qualifying for Europe would be very tough. Roman should not influence any transfers, because it is the Manager who designs the strategy so he is the person who should decide on who he needs, Let Ancelotti handle football at Chelsea – I beg on behalf of all True Blues. Please Roman stay away from involving in with Football Coaches and Players, let the manager do it, keep the board away from this. Give a certain budget to the manager and let him buy whoever he wants. For now the current Chels are not ‘Champions Stock’!