Arsenal take on Burnley at the Emirates on Sunday afternoon. Here is the side I think Arsene Wenger will select for the game:

Arsenal will be looking to keep the pressure on at the top of the table with a win when we take on Burnley at the Emirates on Sunday afternoon.

Goalkeeper: Petr Cech did well to keep a clean sheet during the 4-0 win over Swansea last weekend and I fully expected the Czech legend to keep his place ahead of David Ospina on Sunday.

Defence: We’ve been handed a major boost with the news that Hector Bellerin is available again after recovering from an ankle injury so the Spanish youngster should replace Gabriel at right-back.

Kieran Gibbs is also back in contention but I think we’ll see Nacho Monreal keep his place at left-back while Shkodran Mustafi will once again line-up alongside Laurent Koscielny in the middle of defence.

Midfield: Our options in midfield have been boosted by the return to fitness of Francis Coquelin as he’s made a swift recovery from a hamstring injury that he suffered against Bournemouth earlier this month.

Aaron Ramsey put in a solid display against Swansea last weekend and the Welshman will be hoping to keep his place but I wouldn’t be surprised to see Coquelin recalled. The Frenchman was a firm favourite under Wenger before he got injured and he’s started more games than any other central midfielder this season.

Obviously Santi Cazorla is still some way from full fitness following ankle surgery while Mohamed Elneny is away at the African Cup of Nations so I expect Granit Xhaka to keep his place on Sunday.

Attack: I’m not sure we’ll see too many changes in attack after putting four past Swansea last time out so I think we’ll see the same front four retain their places against Burnley.

Alexis Sanchez was superb at the Liberty Stadium while Olivier Giroud continued his fine form in front of goal with the opener so we should see them start along with Mesut Ozil – who was back to his best against the Swans.

Theo Walcott remains out with a calf injury that’s kept him out of our last five matches so Alex Iwobi is expected to keep his place in attack and he’ll be looking to build on a fine performance against Swansea.

The likes of Alex Oxlade-Chamberlain, Danny Welbeck and Lucas Perez will all have to make do with places on the bench. 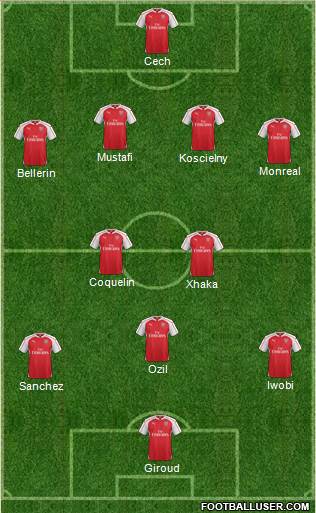 If watching the likes of Chelsea, Tottenham Hotspur and Arsenal battling for the title has whetted your appetite, why not grab your mates and a ball and get down to your local Goals arena to see if you can unleash your inner Alexis Sanchez?