Arsenal, Chelsea & Liverpool Stars Named In The Premier League Team of the Week

Players from Arsenal, Liverpool and Chelsea have all made it in to the Premier League Team of the Week following another pulsating weekend of action.

Players from Arsenal, Liverpool and Chelsea have all made it in to the WhoScored? Premier League Team of the Week following another pulsating weekend of action.

Arsenal moved up to second in the table thanks to a dramatic 2-1 victory over Burnley at the Emirates on Sunday afternoon with Alexis Sanchez netting the winner from the penalty spot deep in to stoppage time.

However, it’s team mate Shkodran Mustafi who has made the TOTW with the German international earning a rating of 8.38 after opening the scoring with a fine header early in the second half.

Chelsea opened up an eight point lead over the Gunners at the top of the table after easing to a 2-0 victory over Hull City at Stamford Bridge yesterday and Thibaut Courtois has secured a place in the team thanks to his score of 7.75.

Liverpool dropped off the pace in the title race after slumping to a disappointing 3-2 defeat at home to Swansea City on Saturday afternoon. Roberto Firmino’s brace wasn’t enough to take home any points but the Brazilian international leads the line up front in the TOTW with a score of 9.83.

West Ham duo Andy Carroll and Manuel Lanzini also make the cut along with on-loan Arsenal midfielder Jack Wilshere – who put in a MOTM display for Bournemouth during their 2-2 draw with Watford. 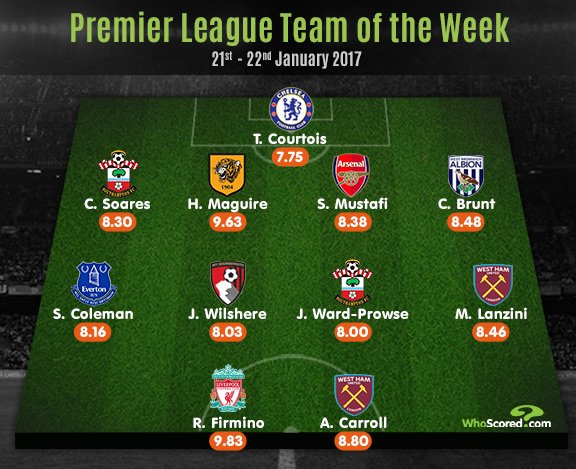