Chelsea will be looking to book their place in the 5th round of the FA Cup when they take on Brentford on Saturday. Here is the team we think Conte will pick

Goalkeeper: Asmir Begovic would ordinarily come in for this game but the Bosnian international is being strongly tipped to join Bournemouth. Third-choice keeper Eduardo is pushing for a rare start but I think Conte will risk Thibaut Courtois between the sticks.

Defence: The Blues boss is expected to make plenty of changes to the side that beat Hull City last weekend meaning John Terry could get a recall in defence while Kurt Zouma will be hoping to continue his injury comeback with another run out.

David Luiz and Cesar Azpilicueta should be rested but Gary Cahill may be retained in the back three. Branislav Ivanovic is highly unlikely to feature as he closes in on a move to Zenit.

Midfield: There should be plenty of changes in midfield with N’Golo Kante and Nemanja Matic given well-earned rests having played virtually ever game for the past few months. This should open the door for Cesc Fabregas to get a recall while youngster Nathan Chalobah will hope to start alongside the Spanish international.

Full-backs Victor Moses and Marcos Alonso should also be rested with Ola Aina getting a chance to impress while Nathan Ake could also start his first game since returning from his loan spell at Bournemouth.

Attack: Conte is almost certainly going to protect his key men ahead of next Tuesday clash with Liverpool so Eden Hazard and Diego Costa should be rested while Pedro is also likely to be given a breather from first team duty.

Willian is expected to get a recall after being named on the bench against Hull while Ruben Loftus-Cheek could get another run-out in his new more advanced role. Michy Batshuayi will also be given another chance to impress up front in the absence of Costa. 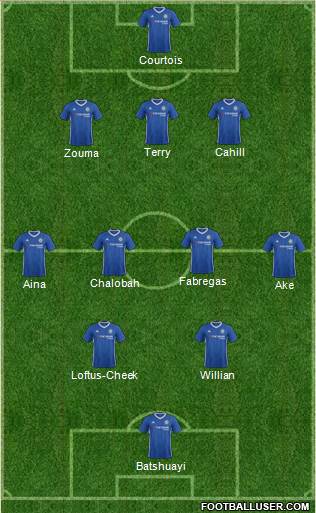