Chelsea take on Man Utd in the quarter finals of the FA Cup at Stamford Bridge on Monday evening. Here is the team we think Antonio Conte will pick

Chelsea will look to book their place at Wembley when they take on Manchester United in the quarter finals of the FA Cup at Stamford Bridge on Monday evening.

Goalkeeper: Conte is expected to roll out his big guns for this game meaning that Thibaut Courtois could start his first FA Cup game of the season with Asmir Begovic having to make do with a place on the bench.

Defence: The likes of Kurt Zouma and John Terry have played in the previous rounds of the competition but if Conte does play his strongest side then the duo may be consigned to substitute roles tomorrow.

David Luiz has been nursing a niggling knee injury for several weeks but it’s not hampering his ability to play so the Brazilian international should once again line-up alongside Cesar Azpilicueta and Gary Cahill in defence.

Midfield: Conte decided to start Cesc Fabregas last week but I think we might see Nemanja Matic recalled to offer more power and defensive solidity against a tough United side. Therefore, Fabregas may have to make-do with a place on the bench as N’Golo Kante is certain to start and he’ll be looking to continue his excellent form.

I don’t think we’ll see any changes out wide so Victor Moses and Marcos Alonso should once again start on the wings.

Attack: We could see Conte freshen things up in attack with Willian coming in to start alongside Eden Hazard which would give Pedro a well earned breather.

Diego Costa is expected to once again lead the line up front with the likes of Michy Batshuayi named on the bench. 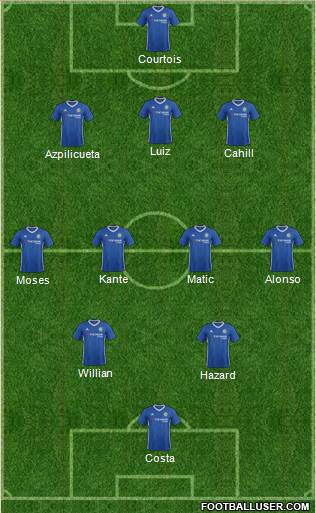 Chelsea are the slight favourites to win the game, however, its always difficult to predict results in the FA Cup and that’s where Odinbet comes in….

Odinbet is FREE to use, and statistical analysis for games played in world football’s top 12 leagues. Use the filter system to refine which games you should bet on and view the analysis that mathematical system produces to give you the best chance of making money from the Chelsea vs Man Utd game.