Liverpool take on Everton at Anfield on Saturday afternoon. Here is the side I think Jurgen Klopp will select for the game:

Liverpool will look to cement their position in the top four when they take on Everton at Anfield on Saturday afternoon.

Goalkeeper: Simon Mignolet has been Liverpool’s first choice keeper for several weeks so I think we’ll see the Belgian international retain his place ahead of Loris Karius once again this weekend.

Defence: Dejan Lovren is ready to return to the starting eleven after recovering from a knee injury so I think the Croatian international will replace Ragnar Klavan alongside Joel Matip against the Toffees.

Otherwise, we should see a familiar back four with Nathaniel Clyne once again starting at right-back while James Milner will continue at left-back.

Midfield: Jordan Henderson was absent from training today so it looks increasingly unlikely the Reds skipper will be fit enough to start as he continues to recover from a foot injury.

Adam Lallana is certain to miss the game after suffering a thigh injury while away on international duty with England so Klopp has a big decision to make in midfield.

Emre Can and Gini Wijnalum are certain to keep their places at the back but I think we’ll see Lucas Leiva get a rare run-out in the midfield holding role.

Attack: Roberto Firmino and Philippe Coutinho trained with the rest of the squad today after arriving back from their exploits with Brazil unscathed so both players are expected to start against Everton on Saturday.

Daniel Sturridge could be back in the squad after recovering from a hip injury that’s hampered him in recent weeks but a place on the bench is the best he can realistically hope for.

The final spot in attack is expected to go to Sadio Mane with the likes of Divock Origi likely to start on the bench in the Merseyside derby this weekend. 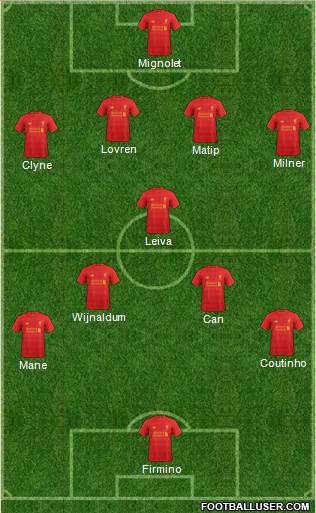 Liverpool are the favourites to win this game, however, its always difficult to predict games in the Premier League and that’s where Odinbet comes in….

Odinbet is FREE to use, and statistical analysis for games played in world football’s top 12 leagues. Use the filter system to refine which games you should bet on and view the analysis that mathematical system produces to give you the best chance of making money from the Liverpool vs Everton game.