Manchester United take on West Brom at Old Trafford on Saturday afternoon. Here is the team I think Jose Mourinho will pick for the game:

Goalkeeper: David De Gea is one of the first names on the team sheet so the Spaniard is almost certain to start this weekend.

Defence: Mourinho has concerns in defence as Phil Jones picked up a toe injury during training with the England squad last week and has been ruled out of action on Saturday.

Chris Smalling also suffered a knee injury while away on international duty with the Three Lions so Marcos Rojo is expected to get a recall alongside Eric Bailly in the middle of defence.

Daley Blind could also come back in to the side at left-back while Antonio Valencia should continue in his familiar right-back role.

Midfield: United will be without the suspended Ander Herrera as he continues to serve his ban following his sending off against Chelsea while Paul Pogba has been ruled out once again with a hamstring injury.

Marouane Fellaini is a doubt after picking up a toe injury while with the Belgian squad but he could be passed fit to start alongside Michael Carrick in the middle of the park.

Attack: Zlatan Ibrahimovic serves the final game of his three-match ban so Marcus Rashford is set to lead the line up front while Wayne Rooney could also be pushing for a recall after recovering from a knee injury that’s kept him out recently.

Juan Mata should keep his place in attack while Jesse Lingard will also be hoping he’s done enough to keep Anthony Martial out of the side after scoring a superb goal during the 3-1 win at Middlesbrough before the international break.

Henrikh Mkhitaryan picked up a minor knock while away with Armenia but he’s expected to be passed fit and should start in attack against West Brom this weekend. 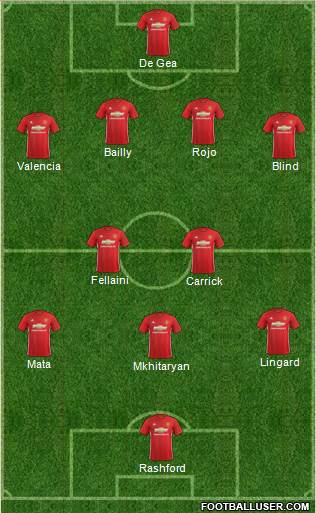