Chelsea take on Southampton at Stamford Bridge on Tuesday evening. Here is the team I think Antonio Conte will pick for the game:

Chelsea will look to go another step closer to reclaiming the Premier League title when they take on Southampton at Stamford Bridge on Tuesday evening.

Goalkeeper: Thibaut Courtois passed a late fitness test on Saturday after recovering from a minor ankle injury and played his part during the FA Cup semi-final win over Tottenham so the Belgian international is expected to retain his place between the sticks.

Defence: Gary Cahill has returned to training after overcoming a sickness bug that kept him out of the match at Wembley over the weekend. Conte says he’ll speak with the defender tomorrow before deciding whether to recall him but I think we’ll see Cahill back in the side.

That means Nathan Ake is expected to drop out despite impressing against Spurs but Conte will no doubt want to stick with his preferred back-three that’s done him proud for the majority of the season. Therefore, David Luiz and Cesar Azpilicueta should once again line-up alongside Cahill tomorrow.

Midfield: Chelsea have no fresh injury concerns so I don’t see them making any changes in midfield. Victor Moses and Marcos Alonso should occupy the wing-back roles while N’Golo Kante will be looking to celebrate his PFA Player of the Year award with another fine display.

Cesc Fabregas is pushing for a recall but I think Nemanja Matic will keep his place after scoring a stunner on Saturday to seal the 4-2 win.

Attack: Conte surprisingly left Eden Hazard and Diego Costa on the bench at the weekend but I think the pair will be recalled for this crucial Premier League game.

Costa is likely to replace Michy Batshuayi up front while Hazard will come in to the attack but it might be Pedro that makes way as it will be difficult for Conte to drop Willian after he scored twice against Spurs. 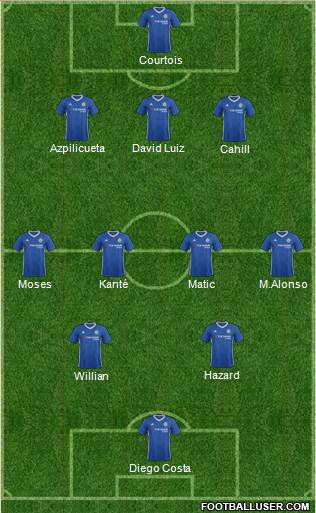