Arsenal have registered their interest in signing Juan Cuadrado but will face stiff competition from several Serie A clubs to land the £26.8m Juventus star

Managers are now pressing ahead with their plans for the summer transfer window so we’ll bring you all the latest news and gossip from around the globe. Today, Arsenal face a battle to sign Juan Cuadrado… 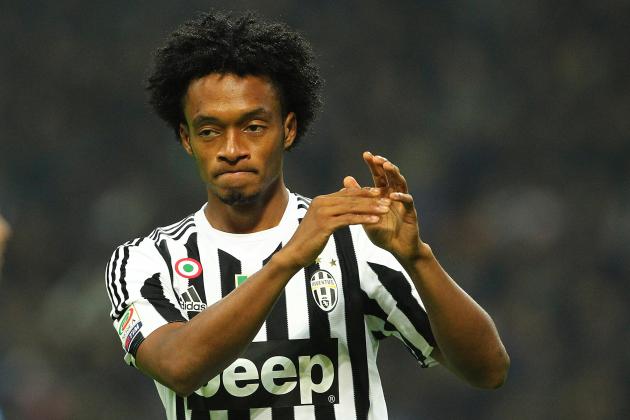 Arsenal have registered their interest in signing Juan Cuadrado but will face stiff competition from several Serie A clubs to land the £26.8m-rated Juventus attacker, according to a report by TeamTalk.

Arsene Wenger has brought-in just two new players so far this summer but the Gunners boss has confirmed he’s looking to add to the signings of Sead Kolasinac and Alexandre Lacazette this month.

A new attacker appears to be on the agenda amid on-going doubts surrounding the long-term futures of Alexis Sanchez, Mesut Ozil and Alex Oxlade-Chamberlain – who’ve all got just one year left on their contracts.

It seems Wenger has identified a surprise target as TeamTalk are citing a report from La Stampa that claim Arsenal have registered their interest in signing Cuadrado this summer.

The 29-year-old has struggled to hold down a regular first team place since moving to Juve following a disastrous six-month spell with Chelsea in 2015 and the Italian outlet says the Serie A champions are ready to cash-in if £26.8m is put on the table.

However, we’ll face some serious competition as the report suggests that Italian giants AC Milan, Inter Milan and Roma are also chasing the Colombian international’s signature.

Cuadrado wasn’t given a fair chance at Chelsea and has been a reasonable success during his time in Italy as he started 21 times to help Juve win the title and reach the final of the Champions League last season.

The reported fee of just under £27m seems like decent value in today’s over-inflated market for a player of his quality and experience so he’d be a solid addition to the squad if we did end up signing him.

However, I personally won’t be losing any sleep over it if we miss out as I would much prefer to see us sign either Thomas Lemar or Riyad Mahrez this summer.