Arsenal welcome Bundesliga outfit Cologne to the Emirates on Thursday night. Here is the side Gooner Mac thinks Wenger will select for the game:

Arsenal will play their first Europa League game in 17 years when we welcome Bundesliga outfit Cologne to the Emirates on Thursday night.

Goalkeeper: Petr Cech didn’t train today as he’s set to be rested with David Ospina expected to be given a run of games in the Europe once again this season.

Defence: Laurent Koscielny is suspended after being sent off during our Champions League defeat to Bayern Munich last season so Per Mertesacker is set for a recall in defence.

Nacho Monreal could also be given a rest ahead of Chelsea so Rob Holding may come in to the side but Shkodran Mustafi could retain his place as he looks to get back to his best following a difficult start to the season.

Midfield: Wenger is expected to make plenty of changes in midfield with several of his key men rested ahead of our trip to Stamford Bridge this coming weekend.

That could open the door for Jack Wilshere to make his first start for Arsenal in over 13 months as he looks to rebuild his career following another fractured leg.

Mohamed Elneny could partner Wilshere in midfield while Sead Kolasinac may be given another run-out in the left wing-back role after impressing against Bournemouth at the weekend.

It’s going to be interesting to see who plays on the right as with Alex Oxlade-Chamberlain sold to Liverpool we don’t really have any established back-up options for Hector Bellerin.

Many are calling for youngster Reiss Nelson to be given a chance but I think Wenger will ease the teenager in to action from the bench so we could see Theo Walcott deployed in an unfamiliar role.

Attack: Mesut Ozil, Alexandre Lacazette and Danny Welbeck all sat out training today which is a big indication they won’t be involved tomorrow so we should see plenty of changes up front.

Olivier Giroud is expected to come in to lead the attack in his first start of the season while if Walcott is deployed on the right then we could see Alex Iwobi also making a rare start.

Alexis Sanchez trained today so he’s expected to be in the squad and Wenger may give him the chance to build on his match fitness as he’s only started one Arsenal game so far this season – although I think it would be a risk ahead of the Chelsea game. 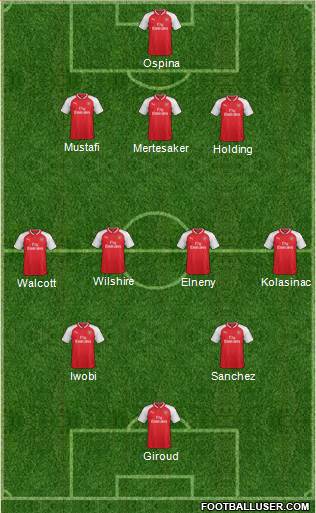