Arsenal take on Chelsea at Stamford Bridge on Sunday afternoon. Here is the side Gooner Mac thinks Wenger will select for the game:

Arsenal will be looking to make it three wins on the spin when they take on Chelsea at Stamford Bridge on Sunday afternoon.

Goalkeeper: Petr Cech was rested for last night’s Europa League win over Cologne and David Ospina dropped another howler so it’s safe to say our No.1 will return between the sticks on Sunday.

Defence: Laurent Koscielny and Shkodran Mustafi also sat out the game at the Emirates last night so they are almost certain to get recalls at the back this weekend.

Rob Holding had a night to forget as he was hauled off at half-time against Cologne so he’ll make way along with Per Mertesacker but Nacho Monreal put in a solid display against the German’s so he should keep his place in the back three.

Midfield: Wenger made plenty of changes in midfield last time out so we should see Granit Xhaka return along with Aaron Ramsey – who’s expected to shake-off a minor knock.

Hector Bellerin looked like he was getting back to his best during a goal-scoring display against the German’s so he’ll retain his place on the right while we should see Sead Kolasinac start after making a huge impact off the bench that saw him score a vital equaliser against Cologne.

Ainsley Maintland-Niles impressed during the second half last night while Reiss Nelson also made a late appearance but the youngsters will drop out of the squad this weekend.

Attack: Alexis Sanchez had a mixed game against Cologne as he was woeful for long periods but turned the game around with a stunning goal. It’s moments of magic like this that we get from him so I think it will be difficult to leave him out against Chelsea.

Mesut Ozil will be assessed tomorrow due to an unspecified knock but the German attacker is expected to be passed fit to start while Alexandre Lacazette should return up front after being rested last night.

That means Olivier Giroud will drop to the bench along with Theo Walcott while Danny Welbeck may also have to make-do with a place among the subs if Sanchez starts. 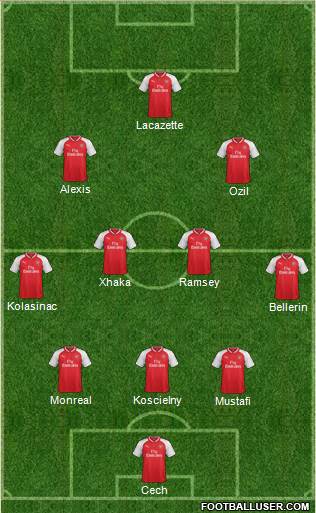