David Luiz was sent off late on as Chelsea and Arsenal played-out an entertaining 0-0 draw at Stamford Bridge this afternoon. 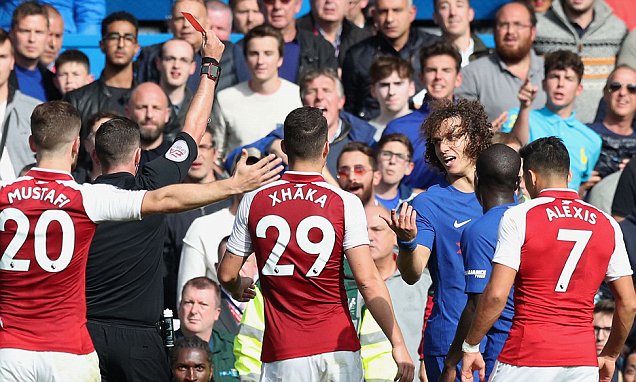 David Luiz was sent off late on as Chelsea and Arsenal played-out an entertaining 0-0 draw at Stamford Bridge this afternoon.

Arsenal had the first decent chance as Danny Welbeck headed wide when well placed before Pedro was denied by Petr Cech when clear through at the opposite end.

The Gunners ended the first half the stronger of the two sides and should have taken the lead when Alexandre Lacazette blazed over from 5 yards out after Aaron Ramsey had hit the post.

Chelsea improved after half-time but clear-cut chances were at a premium and Arsenal thought they might have won it when Shkodran Mustafi headed home in the 74th minute only for the linesman to raise his flag.

The Blues finished the game with 10-men after Luiz was shown a straight red card following a nasty lunge on Sead Kolasinac but Chelsea held on to secure a 0-0 draw at the Bridge.

Watch the highlights below: