Chelsea take on Stoke City at the Britannia Stadium on Saturday afternoon. Here is the side we think Antonio Conte will pick for the game:

Chelsea will be looking to continue their fine form when they take on Stoke City at the Britannia Stadium on Saturday afternoon.

Goalkeeper: Thibaut Courtois is set for a recall after being rested in midweek so number two goalkeeper Willy Caballero will make way.

Defence: David Luiz continues his three-match suspension so Conte has a void to fill in defence. Andreas Christensen will be hoping to retain his place but Antoinio Rudiger is the man most likely to start.

Gary Cahill will once again lead the side out while Cesar Azpilicueta should get a recall after being rested for the League Cup win over Nottingham Forest.

Midfield: Victor Moses is set to come back in at right wing-back with Davide Zappacosta making way while Marcos Alonso should also get recalled on the opposite flank with Kenedy dropping out despite impressing in midweek.

N’Golo Kante is certain to resume his position in the middle of the park after being given a well-earned rest but it will be interesting to see who Conte starts alongside the French international.

Cesc Fabregas has been in-favour in recent weeks but the Blues boss may go with Tiemoue Bakayoko alongside Kante to give a more defensive base against Stoke. Danny Drinkwater is still nursing a calf injury.

Attack: Eden Hazard made a successful first start of the season against Forest so the Belgian international should keep his place in attack this weekend after recently recovering from a broken foot.

Charly Musonda impressed in the League Cup but the youngster is still expected to make way with Willian recalled in attack. Pedro is a doubt with an ankle knock.

Michy Batshuayi took his chance to impress after scoring a hat-trick against Forest but unfortunately the Belgian hitman is still expected to lose his place with Alvaro Morata returning up front. 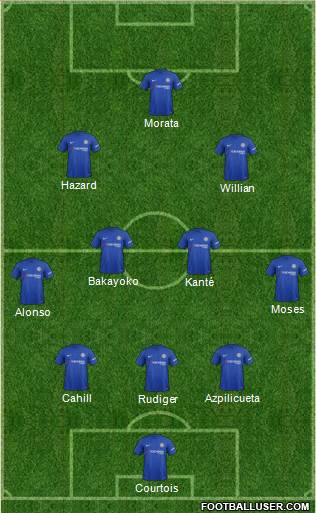