Theo Walcott scored twice as Arsenal eased to a 4-2 victory over BATE Borisov in their Europa League group stage clash in Belarus this evening. 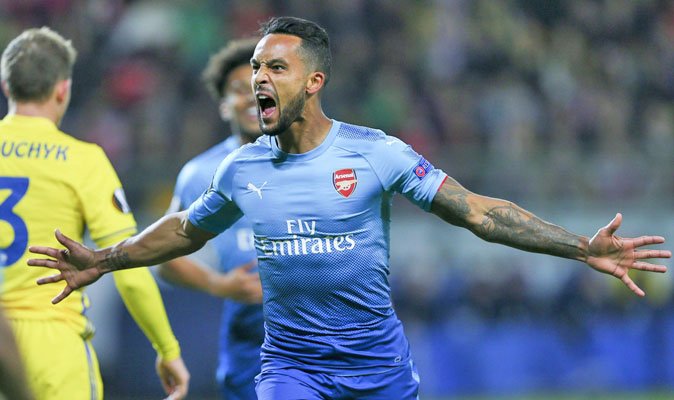 Theo Walcott scored twice as Arsenal eased to a 4-2 victory over BATE Borisov in their Europa League group stage clash in Belarus this evening.

It was a bright start by the boys as we opened the scoring in the ninth minute when Theo Walcott poked home from close range after his initial header was well saved.

Walcott then made it 2-0 in the 22nd minute as he pounced on a mistake from BATE goalkeeper Denis Scherbitski to slot home in to the bottom corner with a fine low shot.

It was 3-0 shortly after as Rob Holding volleyed home following a Walcott corner but the hosts pulled one back when Mirko Ivanic headed high in to the net in the 28th minute – although David Ospina should arguably have done more to keep it out.

We were then gifted a penalty shortly after half time and Olivier Giroud made no mistake to score his 100th goal for Arsenal to make it 4-1 before BATE pulled another one back through Gordeichuk following some poor defending/goalkeeping.

Despite a number of chances for both sides, that was the end of the scoring so we eased to a 4-2 victory that moves us on to six points at the top of Group H – two clear of second placed Crvena Zvezda after they beat Cologne.