Arsenal take on Brighton & Hove Albion at the Emirates on Sunday afternoon. Here is the side Gooner Mac thinks Wenger will select for the game:

Arsenal will be looking to keep pace with the top four when they take on Brighton & Hove Albion at the Emirates on Sunday afternoon.

Goalkeeper: David Ospina started during the 4-2 win over BATE Borisov but number one goalkeeper Petr Cech is certain to be recalled tomorrow afternoon.

Defence: Wenger has confirmed that Laurent Koscielny is a doubt for the game with an on-going Achilles injury that’s hampered him for some time so I don’t think we’ll risk the Frenchman at home to Brighton.

Therefore, Rob Holding could keep his place in the back three with Shkodran Mustafi also retaining his place while Nacho Monreal should be recalled with Per Mertesacker the man to make way.

Midfield: Sead Kolasinac has recovered from a minor knock and is passed fit so he should return at left wing-back while Hector Bellerin is expected to resume his position on the right.

Granit Xhaka is certain to get a recall in the middle of the park and with Aaron Ramsey needed further forward, we could see Mohamed Elneny start for the third game in succession.

Reiss Nelson and Ainsley Maitland-Niles will make way after impressive displays against BATE while Jack Wilshere is also likely to drop to the bench despite picking up the MOTM award in midweek.

Attack: Mesut Ozil has been ruled out once again as he continues to nurse a minor knee injury and with Alex Iwobi also a doubt and Danny Welbeck still recovering from a groin injury, we suddenly don’t have too many options in attack.

Therefore, Ramsey could be deployed in a more advanced role – just as he was against West Brom last Monday – although Theo Walcott staked his claim with a brace in the Europa League.

Alexandre Lacazette should get a recall up front after being rested last time out so Olivier Giroud will drop out despite scoring his 100th goal on Thursday night while Alexis Sanchez is also expected to come back in to the attack. 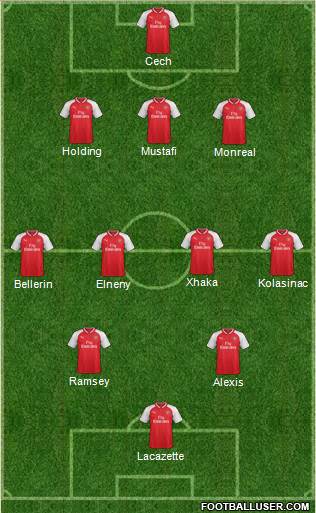