Manchester United take on Benfica in Portugal on Wednesday night. Here is the team I think Jose Mourinho will pick for the game:

Manchester United will be looking to put one foot in the knockout stages of the Champions League when they take on Benfica in Portugal on Wednesday night.

Goalkeeper: Number one goalkeeper David De Gea is expected to keep his place between the sticks with Sergio Romero making-do with a place among the substitutes.

Defence: Eric Bailly hasn’t travelled to Portugal as he’s still feeling the effects of the calf injury that ruled him out of Saturday’s draw with Liverpool so Chris Smalling is expected to keep his place in defence.

Phil Jones will also retain his place in what could be a back four with Mourinho tipped to revert to his usual formation having played with five at the back at Anfield.

Daley Blind may get a recall in place of Matteo Darmian as the Italian struggled against Liverpool while Antonio Valencia should once again start at right-back.

Midfield: United still have problems in midfield as Paul Pogba is still working his way back to full fitness from a hamstring injury while Marouane Fellaini is out with knee ligament trouble.

With Michael Carrick also nursing a knock it means Ander Herrera is set to continue alongside Nemanja Matic in the middle of the park tomorrow night.

Attack: Mourinho is expected to freshen things up in attack with Marcus Rashford pushing for a recall after shaking off a knock so Anthony Martial could drop back to the bench against Benfica.

Henrikh Mkhitaryan should retain his place and he’ll be looking to continue his fine form in Europe while Juan Mata may come back in to the side with Ashley Young dropping out.

Jesse Lingard may have to make-do with a place among the subs but Romelu Lukaku will lead the line up front and the Belgian striker will want to get back among the goals after drawing a blank at the weekend. 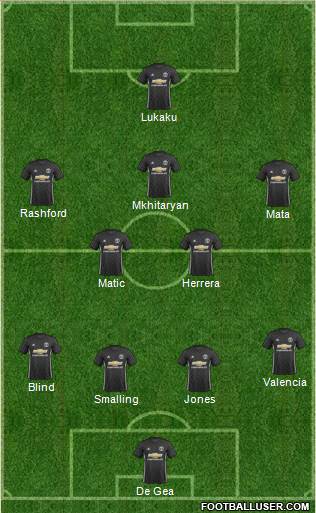