London dominates the WhoScored? Premier League Team of the Week as players from Arsenal, Chelsea and Tottenham all make the cut.

London dominates the WhoScored? Premier League Team of the Week as players from Arsenal, Chelsea and Tottenham all make the cut.

Tottenham hitman Harry Kane continued his sensational form after scoring twice during their 4-1 victory over Liverpool at Wembley yesterday so understandably he makes the line-up thanks to a score of 9.4.

Team mate Dele Alli also makes the TOTW as a goal against the Reds on Sunday helped him to a score of 8.8 while Hugo Lloris was the best performing goalkeeper.

Arsenal got back to winning ways in emphatic style with Alexis Sanchez scoring and assisting during a 5-2 win over Everton and he joins Kane up front thanks to his score of 9.5 – which was the highest of any player this week.

Mesut Ozil silenced some of his critics after producing a magnificent performances at Goodison Park with the German international scoring the important second goal and bagging one assist so understandably he also makes the cut.

Chelsea had to stage a late comeback to see-off Watford 4-2 at Stamford Bridge with Eden Hazard at the center of things once again and he makes the team thanks to a score of 8.7.

Pedro joins the Belgian international in the TOTW after scoring a stunning opener at the Bridge while David Luiz was one of the best performing defenders despite shipping two goals.

Manchester United’s Ashley Young creeps in to the team at left-back despite his side losing at Huddersfield while Tommy Smith was the best right-back in the league this weekend.

Surprisingly, Nicolas Otamendi is the only Manchester City player to make the TOTW despite Pep Guardiola’s men thrashing Burnley 3-0 at the Etihad Stadium.

Here is the Team of the Week based on data provided by WhoScored?: 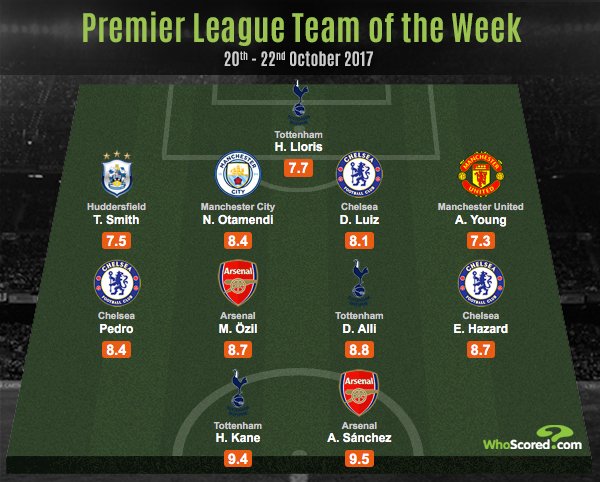