Chelsea will be desperate for a win in order to keep in touch with the league leaders when they take on Bournemouth at Dean Court this evening.

The Blues staged a late comeback to beat Watford 4-2 at Stamford Bridge last weekend to ensure they remain above Arsenal in fourth place in the table thanks to a superior goal difference.

However, Antonio Conte’s side remain 9 points off leaders Manchester City so Chelsea need a win on the south coast today in order to keep their title aspirations alive.

They’ll face a Bournemouth side that sit 19th in the table but Eddie Howe’s men have won their last two games against Middlesbrough and Stoke so Conte won’t be taking anything for granted.

Chelsea midfielder N’Golo Kante is back in training after recovering from a hamstring injury but this game will come too soon so the Frenchman remains on the sidelines.

Danny Drinkwater made his long-awaited debut during the midweek League Cup win over Everton but he’s still not 100% fit so isn’t expected to feature today.

Victor Moses is also still nursing a hamstring injury but the likes of Thibaut Courtois, David Luiz, Tiemoue Bakayoko, Cesc Fabregas, Eden Hazard and Alvaro Morata are set for recalls after being rested last time out.

Bournemouth striker Josh King is a major doubt for the game as he continues to struggle with a back injury that’s hampered him for the last two games but Jermain Defoe has shaken off a hamstring problem so he should start in attack. 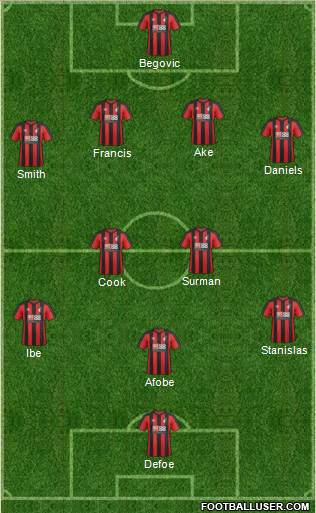 Bournemouth 1-2 Chelsea: The Blues have won four of their last five games against Bournemouth and the Cherries have really struggled for consistency so far this campaign. Chelsea should be well-rested after their big-guns didn’t feature in midweek so I fancy them to take home all three points.

Chelsea are best priced at 8/13 to win this game with the bookmakers but we can get new customers enhanced odds of 20/1 on the Blues – just click here to take advantage of these incredible odds [winning paid in free bets, max stake £1, T&C’s apply].