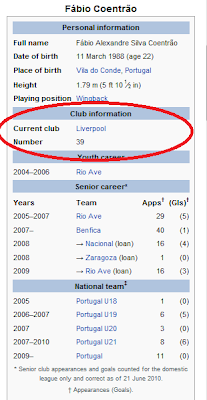 Rumours have spread that the first signing of Dalglish’s return to Anfield will be Portugese wing-back, Fábio Coentrão. But according to Wikipedia, the 22 year-old has already signed for Liverpool, and is playing with the number 39 on his shirt!

Now obviously Wikipedia is not a reliable site in which you can draw solid conclusions as to player transfers, as anyone could have changed his current club information. However, there may be some truth to the rumours that Fábio Coentrão will sign for Liverpool this January. Liverpool’s left back position is currently occupied by Paul Konchesky. He isn’t the most popular player at Liverpool at the moment, not least because of his poor form, and the consensus that the player isn’t good enough for Liverpool, as well as the fact he was signed by Roy Hodgson.

Coentrão had a brilliant World Cup, being probably the best player in the Portugal side, providing an excellent source of width, pace and the provision of crosses – all things that Liverpool currently lack. Chelsea were reportedly interested immediately after the World Cup last summer, but a deal never materialised – they do have Ashley Cole after all. Manchester United were also said to have taken an interest in the Portugese, after there were questions over Patrice Evra’s future, but it seems Evra’s future is safe at United, and with the emergence of the da Silva twins, this signing would not be needed.

However, Liverpool need another left back, with Aurelio never really showing consistency, as well as being prone to injuries as well as Paul Konchesky looking as if he will be on his way out. A fee of around £16 million is being circulated for the current Benfica man. Quite a hefty sum for a left back, one that the Liverpool owners would have to dig deep for, but a signing, I would suggest, that would be worth the money.