Manchester United entertain Brighton at Old Trafford on Saturday afternoon. Here is the team I think he’ll pick for the game:

Manchester United will be looking to bounce back from their Champions League disappointment when they entertain Brighton at Old Trafford on Saturday afternoon.

Goalkeeper: Sergio Romero made a rare start in midweek but I think it’s safe to say David De Gea will be recalled between the sticks this weekend.

Defence: Mourinho made plenty of changes to his defence in the Champions League so we should see some of the first team regulars recalled against Brighton.

Antonio Valencia was rested for the defeat to Basel so he should come back in for Matteo Darmian at right-back while Ashley Young could replace Daley Blind on the left side of defence.

Phil Jones remains unavailable with a thigh injury that’s kept him out of the last two games but Eric Bailly could return after missing the trip to Switzerland with a minor knock.

Chris Smalling should keep his place at the back meaning Marcos Rojo will drop out after making his first start since recovering from a knee ligament injury while Victor Lindelof will also miss out.

Midfield: Paul Pogba has shown no signs of the hamstring injury that kept him out for several weeks since making his return last weekend so the Frenchman should continue in the middle of the park.

Nemanja Matic should get a recall in midfield after being rested against Basel so Marouane Fellaini could drop to the bench while a slight formation change could also see Ander Herrera making way.

Attack: The switch in formation may see Juan Mata recalled in attack as Henrikh Mkhitaryan appears to have fallen out-of-favour under Mourinho in the last few games.

Zlatan Ibrahimovic continued his comeback with another substitute appearance in midweek but the Swede may not be deemed fit enough to start just yet so I expect we’ll see him on the bench again on Saturday.

That means Romelu Lukaku should once again lead the line up front and he could be supported by Marcus Rashford and Anthony Martial with Jesse Lingard making way. 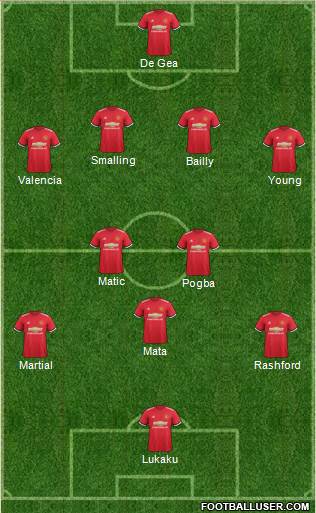