Chelsea take on Huddersfield Town at the Kirklees Stadium on Tuesday night. Here is the side we think Antonio Conte will pick for the game:

Chelsea will be desperate to get back to winning ways when they take on Huddersfield Town at the Kirklees Stadium on Tuesday night.

Goalkeeper: Thibaut Courtois is almost certain to retain his place between the sticks so Willy Caballero will have to once again make-do with a place on the bench.

Defence: David Luiz is still expected to miss out with an on-going knee injury that’s hampered him in recent weeks so Andreas Christensen should continue in the middle of the back three.

Antonio Rudiger could be in line for a recall and Gary Cahill is the man most likely to make way as Cesar Azpilicueta should keep his place on the right side of defence.

Marcos Alonso will no doubt retain his place in the left wing-back position but we should see Victor Moses return on the right with Davide Zappacosta dropping out.

Midfield: Tiemoue Bakayoko came under fresh criticism following his performance during the defeat to West Ham on Saturday so the French international could be left-out tomorrow night.

Conte has been playing with three central midfielders this season so with N’Golo Kante and Cesc Fabregas expected to keep their places there is a void to fill. Danny Drinkwater missed the West Ham game due to illness but the England international could return to take his place in the middle of the park if he proves his fitness.

Attack: If Conte sticks with three midfielders then it means he can only select one attacking midfielder and Eden Hazard is almost certainly going to be the man to fill that role.

That means Willian and Pedro will have to make-do with places on the bench but Alvaro Morata should once again lead the line up front as I’m not convinced Conte trusts any of his other strikers enough.

Michy Batshuayi is the closest rival for Morata but I don’t see the Blues boss giving him a start even if he wanted to freshen things up in attack so I expect Morata to keep his place up front. 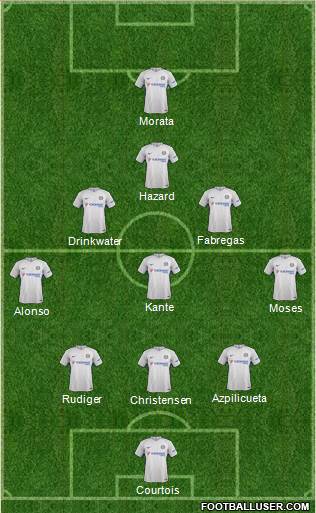