Chelsea take on Bournemouth at Stamford Bridge on Wednesday evening. Here is the side we think Antonio Conte will pick for the game:

Chelsea will be looking to book their place in the semi-finals of the Carabao Cup when they take on Bournemouth at Stamford Bridge on Wednesday evening.

Goalkeeper: Thibaut Courtois is expected to be given a rest with Willy Caballero coming in between the sticks tomorrow night.

Defence: Conte has confirmed he’ll rotate his squad with his key men given a rest ahead of this weekend’s Premier League clash with Everton at Goodison Park.

It means Andreas Christensen and Cesar Azpilicueta should be left out with Antonio Rudiger coming in while youngster Ethan Ampadu could also be given a chance to impress at the back.

However, David Luiz has once again been ruled out as the Brazilian international continues to recover from a knee injury so Gary Cahill could keep his place in defence.

Midfield: Victor Moses will be given a rest so Davide Zappacosta could be recalled in the right wing-back position while Conte has confirmed Kenedy will start meaning Marcos Alonso should be handed a well-earned breather.

N’Golo Kante is also expected to be rested while Tiemoue Bakayoko has also earned a night off after starting the last three games so Danny Drinkwater is in-line for a recall while Cesc Fabregas will also hope to come back in the side after being named on the bench against Southampton at the weekend.

Attack: Alvaro Morata is fit again after recovering from a niggling back injury but Conte has confirmed he wants to give Michy Batshuayi a rare start so the Belgian international will lead the line up front tomorrow night.

Eden Hazard is expected to be rested but Pedro and Willian may keep their places as they are likely to drop to the bench for the trip to Everton at the weekend.

Charly Musonda has been ruled out through injury but youngsters Callum Hudson-Odoi and Dujon Sterling are expected to be named on the bench against Bournemouth tomorrow. 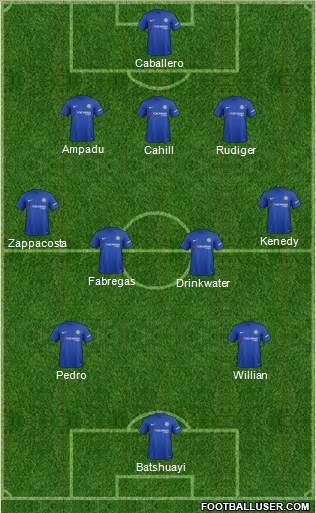