Chelsea will be looking to get back to winning ways when they take on Brighton at Stamford Bridge on Boxing Day. Here is the side we think Conte will pick

Chelsea will be looking to get back to winning ways when they take on Brighton at Stamford Bridge on Boxing Day.

Goalkeeper: Thibaut Courtois was back between the sticks for the draw at Everton after being rested in the League Cup and the Belgian international is certain to keep his place in the side.

Defence: Gary Cahill could be in-line for a recall after being left on the bench at Goodison Park but David Luiz is still out with an on-going knee injury.

Antoinio Rudiger is the man most likely to make way if Conte recalls Cahill as Andreas Christensen has done exceptionally well since coming in to the side while Cesar Azpilicueta is one of Chelsea’s most consistent players.

Midfield: Conte may decide to freshen things up in the right wing-back position with Davide Zappacosta coming in for Victor Moses but Marcos Alonso should keep his place on the left.

Tiemoue Bakayoko has been showing some superb form in recent games but Conte may want to give the Frenchman a breather so Cesc Fabregas could come in alongside N’Golo Kante – although Danny Drinkwater is another option for the Italian coach.

Attack: Alvaro Morata is back in contention after serving a one-game suspension against Everton so the Spanish international should come straight back in to the starting eleven against Brighton.

That means Eden Hazard should move back out to the wing after the Belgian superstar played in a more central role at Goodison Park on Saturday afternoon.

Willian may be the man to make way with Pedro keeping his place in the attack while Michy Batshuayi will provide a striking option from the bench once again. 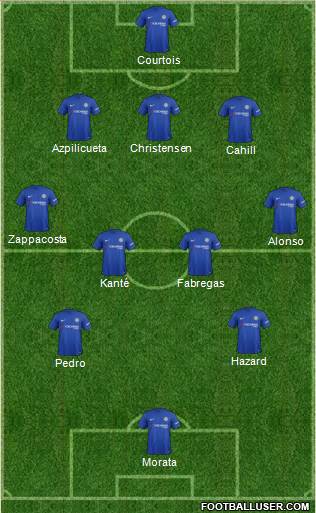