Liverpool entertain Everton at Anfield in the FA Cup on Friday night. Here is the side I think Jurgen Klopp will select for the game: Liverpool will be hoping to book their place in the fourth round of the FA Cup when they entertain Everton at Anfield on Friday night.

Goalkeeper: The Reds boss has confirmed that Simon Mignolet will be rested with Loris Karius starting between the sticks and Danny Ward named on the bench.

Defence: Klopp is expected to rotate his side after a hectic festive period but the big question on everyone’s lips is whether Virgil van Dijk will start. The Dutch international is fully-fit after completing his move from Southampton and I think we’ll see him handed his debut tomorrow.

Joel Matip could also be recalled after being named among the substitutes during the win at Burnley so Dejan Lovren and Ragnar Klavan could drop out tomorrow night.

Joe Gomez could keep his place and move over to right-back with Trent Alexander-Arnold dropping out while Andrew Robertson is set for a recall at left-back.

Midfield: Jordan Henderson remains out with a hamstring injury so we could see James Milner come in to the midfield with Emre Can handed a rest and Gini Wijnaldum keeping his place.

Adam Lallana is unlikely to start his second game in succession after making his injury comeback at Burnley on Tuesday so Alex Oxlade-Chamberlain may drop back in to the midfield to offer more creativity in the middle of the park.

Attack: Mohamed Salah has been ruled out with a groin injury that he sustained against Leicester City last weekend but Klopp is confident he won’t be on the sidelines for too long.

Philippe Coutinho also misses out due to a minor thigh problem that kept him out of the trip to Turf Moor but the Brazilian international should be back in the squad to face Man City next weekend.

Roberto Firmino is expected to get a recall after being named on the bench last time out while Sadio Mane should keep his place in attack with Salah and Coutinho ruled out.

Dominic Solanke could keep his place up front after putting in a hard-working display at Burnley as Daniel Sturridge is still out injured. 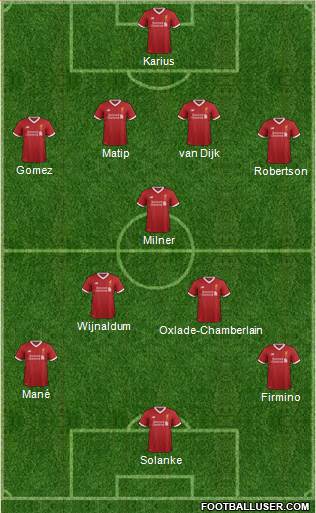