Manchester United take on Burnley at Turf Moor on Saturday afternoon. Here is the team I think Jose Mourinho will pick for the game:

Manchester United will be hoping to cut Manchester City’s lead at the top of the table with a win when they take on Burnley at Turf Moor on Saturday afternoon.

Goalkeeper: David De Gea is one of the first names on Mourinho’s team sheet so I see no reason why he won’t start other than a late injury.

Defence: United kept a clean sheet during the routine 3-0 win over Stoke last weekend but Mourinho could be tempted to freshen things up with Marcos Rojo pushing for a recall.

Chris Smalling is the man most likely to make way with Phil Jones keeping his place at the back while Antonio Valencia should once again start at right-back after scoring a beauty last time out.

Ashley Young is back from suspension so it’s going to be interesting to see who starts at left-back as Luke Shaw has done extremely well during his absence. I think Shaw might just keep his place for this game.

Midfield: I don’t think we’ll see any changes in midfield so I fully expect to see Nemanja Matic once again lining-up alongside Paul Pogba in the middle of the park.

Ander Herrera and Marouane Fellaini will therefore have to make do with a places among the substitutes unless Mourinho decides to switch formation and play three in midfield.

Attack: The big question is whether Alexis Sanchez will complete his proposed move from Arsenal in time to make his debut. The deal is reportedly close but United are running out of time to meet the 12pm Friday deadline to have him registered in time to be eligible.

As is stands, unless things move quickly overnight Sanchez will have to wait to make his bow but Marcus Rashford could get a recall in attack after being named on the bench last weekend.

Anthony Martial could move across to the right side with Juan Mata making way while Jesse Lingard should keep his place in the number ten role behind the striker.

Romelu Lukaku was among the goals last weekend and he should once again lead the line up front with Zlatan Ibrahimovic still out with a knee injury.

Henrikh Mkhitaryan isn’t expected to be included in the squad as he closes-in on a move to Arsenal as part of the Sanchez deal. 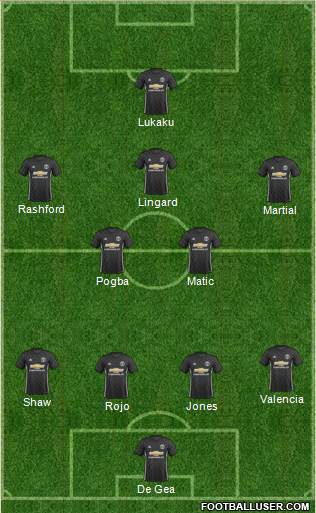