The January transfer window is coming to a close so clubs are working hard trying to strengthen their squads for the second half of the season and put deals in place for the summer. Today, Emerson Palmieri has completed his move to Chelsea…. 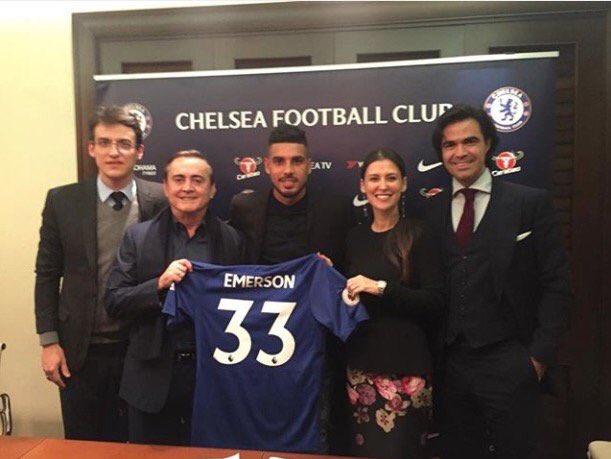 Emerson Palmieri has now completed his move to Stamford Bridge as photos have emerged of him posing with the Chelsea shirt after joining the Blues in a £25m deal, according to the Metro.

Antonio Conte is looking to further strengthen his squad this month and a new left-back to offer competition for Marcos Alonso has been a priority for the Blues boss for some time.

Palmieri emerged as a top target earlier this month and Chelsea have been locked in negotiations with Roma over a potential double deal for him and striker Edin Dzeko.

The talks over the Bosnian international broke down but the Blues pushed ahead with a deal for Palmieri and footage appeared online earlier today showing the full-back leaving Rome en route to London.

The Daily Mail claims the 23-year-old was scheduled to undergo his medical on Tuesday afternoon and put the finishing touches on his contract with the Premier League giants.

It appears the formalities have now been concluded as photos have been leaked online showing Palmieri posing with the Chelsea shirt and it looks like he’ll be wearing the number 33 shirt during the second half of the season.

There has been no confirmation from Chelsea [at the time of writing] but the Metro claim the west Londoners have agreed a deal worth around £25m with Roma, which include various additional add-ons.

Palmieri joined Roma in 2015 and enjoyed an encouraging start to life at the Stadio Olympico but has been restricted to just 15 minutes of Serie A football this season so it seems he’s moved to Chelsea in search of a fresh start.

Chelsea are still looking to make further additions before the window closes tomorrow night and the Mirror claim they are set to sign Olivier Giroud in an £18m deal from Arsenal.

***UPDATE*** This transfer has now been confirmed by Chelsea on Chelseafc.com. Palmieri has joined the club on a four-and-a-half-year contract.