Chelsea take on West Bromwich Albion at Stamford Bridge this evening. Here is the side we think Antonio Conte will pick for the game: Chelsea will be looking to climb back in to the top four when they take on West Bromwich Albion at Stamford Bridge this evening.

Goalkeeper: Thibaut Courtois has conceded seven goals in his last two matches but the Belgian international should still keep his place in goal tonight with Willy Caballero on the bench.

Defence: Andreas Christensen missed the defeat at Watford with a hamstring injury but the young defender is expected to return to the squad tonight and should replace David Luiz in the back three.

Antonio Rudiger is pushing for a recall but Cesar Azpilicueta is certain to keep his place while I think Gary Cahill will also start so the German international may have to make-do with a place on the bench alongside Luiz.

Midfield: Cesc Fabregas could return to the staring eleven after recently recovering from a hamstring problem with Tiemoue Bakayoko making way after another disappointing outing at Vicarage Road last week.

N’Golo Kante is certain to keep his place in the middle of the park so Danny Drinkwater may once again be named on the bench if Conte opts to play three in attack.

Victor Moses should keep his place in the right wing-back position while Marcos Alonso is expected to be recalled on the left so Davide Zappacosta will make way.

New signing Emerson Palmieri is still short of fitness as he’s only recently recovered from a serious injury so he’s likely to remain among the substitutes.

Attack: Alvaro Morata has once again been ruled out with a back injury and Conte has suggested he has no idea when the Spanish international will be available for selection again.

Olivier Giroud made his first appearance in a Chelsea shirt off the bench last week but the Frenchman is expected to be handed his full debut this evening so he’ll lead the line up front.

Eden Hazard will therefore drop back in to a more natural attacking midfield role while Willian could get the nod over Pedro if Conte wants two attackers to play off Giroud. 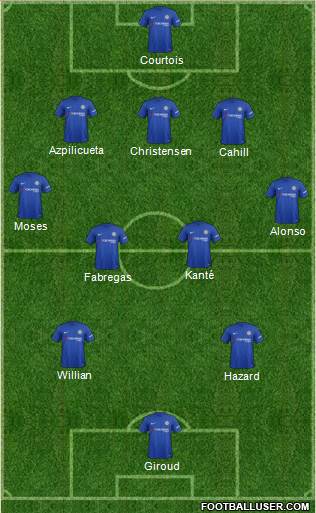