Chelsea take on Barcelona at Stamford Bridge on Tuesday night. Here is the side we think Antonio Conte will pick for the game:

Chelsea will be desperate to secure a positive result when they take on Barcelona in the first leg of their Champions League last-16 tie at Stamford Bridge on Tuesday night.

Goalkeeper: Thibaut Courtois was rested for the FA Cup win over Hull so the Belgian international is expected to come back in with Willy Caballero dropping to the bench.

Defence: There should be changes in defence too as Cesar Azpilicueta is certain to get a recall after being rested on Friday night with Antonio Rudiger set to make way.

Andreas Christensen will also come back in to the defence with youngster Ethan Ampadu dropping out despite putting in an impressive display in the FA Cup win.

David Luiz hasn’t trained in the build-up to the game after missing the Hull match with a knock so Gary Cahill is expected to keep his place in the back three tomorrow night.

Midfield: N’Golo Kante is certain to come back in to the midfield after being given a well-earned breather last time out but Tiemoue Bakayoko is set to miss out after failing to train today having missed the Hull game with a knock.

I think Conte will be tempted to play three central midfielders to try and deal with the Barcelona attack so Cesc Fabregas and Danny Drinkwater could keep their places in the middle of the park. Ross Barkley trained today after recovering from a hamstring problem but he make have to make-do with a place on the bench.

Victor Moses was rested in the cup game so the Nigerian international should be recalled in the right wing-back position with Davide Zappacosta dropping out.

Marcos Alonso was back in training today after missing the last three games with an ankle problem and the Spaniard should be fit to replace Emerson Palmeiri in the left wing-back role.

Attack: Alvaro Morata is pushing for a recall after coming off the bench against Hull having recovered from a back injury so the Spaniard could be given the nod to lead the line up front as he knows Barcelona well from his time with Real Madrid.

Chelsea are likely to spend long periods without the ball and play on the counter-attack so the pace of Morata may be useful. It means Olivier Giroud will drop out despite scoring his first Chelsea goal last time out.

If Conte plays three in midfield then it means he can only play one attacker off the striker and no doubt that man will be Eden Hazard – who should be fresh after being rested against Hull.

Unfortunately, there may be no place for Willian despite the Brazilian attacker scoring twice in the FA Cup win so he may have to make-do with a place on the bench alongside former Barca star, Pedro. 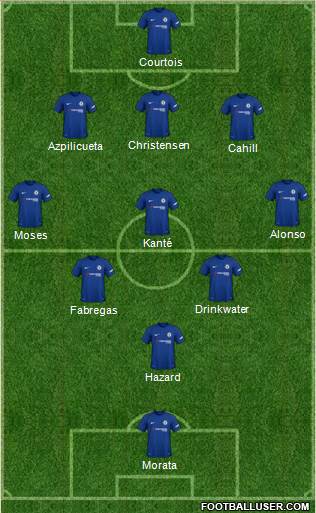